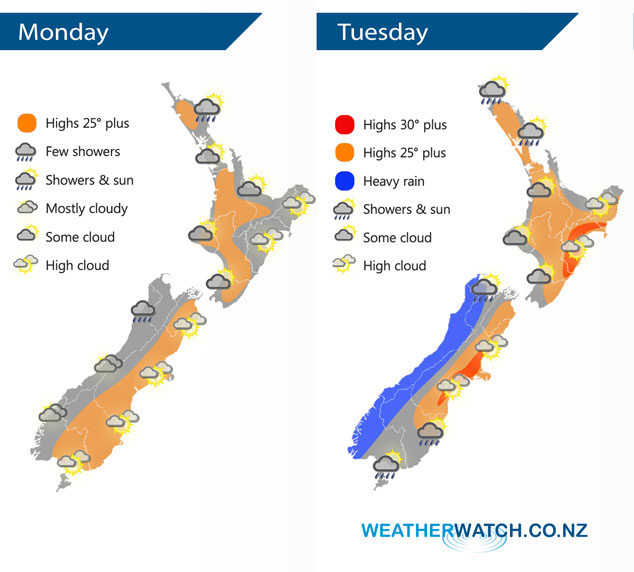 A mix of sun and cloud for most of the North Island today, chance of a shower for Northland at times especially in the east. The West Coast of the South Island sees increasing cloud, showers late afternoon or evening. Warm in the east with some high cloud.

Sunny spells for the upper / western North Island on Tuesday, chance of a light shower or two for some exposed eastern parts of Northland and Auckland. Rain moves onto the southwestern corner of the North Island overnight. Heavy rains pushes northwards along the West Coast of the South Island, easing evening with a southwest change. Mainly dry in the east with some high cloud, spots of rain spread into Marlborough however in the evening. Also Southland and Otago sees some brief rain then a few showers with a southwest change.

Is the weather on the Bay of Islands for Tuesday supposed to be fairly clear? Or rain?

Hi there, these Infographics are designed to give people a quick glance as to where the ‘bigger’ weather features are. For the details you need we have hourly forecasts for the Bay of Islands (and many places around it) which shows chance of rain etc. If you need more details, go to RuralWeather.co.nz (takes 10 seconds to load but we’re working on a fix for that this month) – RuralWeather also had cloud graphs and data, all for free.