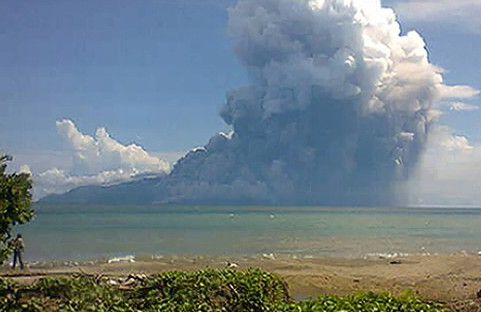 Six people, including two children, died after a volcano erupted on an island in south-central Indonesia on Saturday, government officials reported.

Mount Rokatenda erupted at 4:27 a.m. Saturday (local), spewing ash clouds of up to 2000 meters from its peak, said Indonesian National Disaster Agency spokesman Sutopo Purwo Nugroho. The volcano is located on the island of Palue, in East Nusa Tenggara province.

Nugroho said the victims died in a cloud of ash released by the volcano, and those clouds were still being reported hours after the initial eruption. Indonesia’s volcanology agency ordered people to stay at least 3 kilometers (2 miles) away from the summit.

Palue is more than 2,000 kilometers east of Jakarta, Indonesia’s capital. The island has about 10,000 residents.
Indonesia is located on the “Ring of Fire,” an arc of fault lines circling the Pacific Basin that is prone to frequent earthquakes and volcanic eruptions.

The last major eruption in the country was in October 2012, when the Mount Lokon spewed fresh lava and ash in northeastern Indonesia.

Image: The photo taken from the Maurole district of East Nusa Tenggara province shows Mount Rokatenda volcano spewing a huge column of hot ash during an eruption on August 10, 2013 / CNN.