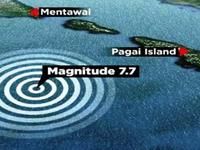 Nine Australians missing for almost 24 hours after a powerful earthquake triggered a deadly tsunami in Indonesia’s west are safe and well.

Scores more were missing and information was only beginning to trickle in from the sparsely populated surfing destination, so casualties were expected to rise.

With few able to get to the islands to help with searches, fisherman were left to find the dead and look for the living.

Corpses were strewn about since there were not enough people to dig graves, according to the Mentawai district chief, Edison Salelo Baja.

More than 4,000 people expected to spend the night without shelter because tents and other supplies had also not arrived.

Mujiharto, who heads the Health Ministry’s crisis centre, said 113 bodies have been recovered so far. The number of missing was between 150 and 500.

Nine Australians and a Japanese man were in the area aboard surf charter boat MV Southern Cross when the quake struck.

Fears had been growing for the vessel, skippered by Australian Chris Scurrah and Japanese Akinori Fujita.

But the men finally made contact with their Padang-based company Sumatran Surfariis (Surfariis) on Tuesday night.

‘They are now safe, they have been found,’ staff member Yuli Rahmi told AAP.

‘They only lost their phone signal, they didn’t even feel any tsunami.’

The men were now on land on the island of South Pagai, Ms Rahmi said.

The fault that ruptured on Monday on Sumatra island’s coast also caused the 2004 quake and monster Indian Ocean tsunami that killed 230,000 people in a dozen countries.

Though hundreds of disaster officials were unable to get to many of the villages on the Mentawai islands – reachable only by a 12-hour boat ride – they were preparing for the worst.

‘We have 200 body bags on the way, just in case,’ said Mujiharto, who heads the Health Ministry’s crisis centre, shortly before announcing a five-fold increase in the death toll.

Indonesia, the world’s largest archipelago, is prone to earthquakes and volcanic activity due to its location on the so-called Pacific Ring of Fire – a series of fault lines stretching from the Western Hemisphere through Japan and Southeast Asia.

The country’s most volatile volcano, Mount Merapi, 1,300 kilometres to the east, started to erupt at dusk on Tuesday as scientists warned that pressure building beneath its lava dome could trigger one of the most powerful blasts in years.

The 7.7-magnitude quake that struck late on Monday just 20 kilometres beneath the ocean floor was followed by at least 14 aftershocks, the largest measuring 6.2, according to the US Geological Survey.

Many panicked residents fled to high ground and were too afraid to return home.

That could account in part for the more than 500 people still missing, said Hendri Dori, a local parliamentarian who was overseeing a fact-finding missing. ‘We’re trying to stay hopeful,’ he said.

Hundreds of wooden and bamboo homes were washed away on the island of Pagai, with water flooding crops and roads up to 600 metres inland. In Muntei Baru, a village on Silabu island, 80 per cent of the houses were badly damaged.

Ade Edward, a disaster management agency official, said crews from several ships were still unaccounted for in the Indian Ocean.

The quake also jolted towns along Sumatra’s western coast – including Padang, which last year was hit by a deadly 7.6-magnitude tremor that killed more than 700. Mosques blared tsunami warnings over their loudspeakers.

‘Everyone was running out of their houses,’ said Sofyan Alawi, adding that the roads leading to surrounding hills were quickly jammed with thousands of cars and motorcycles.

‘We kept looking back to see if a wave was coming,’ said 28-year-old resident Ade Syahputra.