Home > News > Indonesia: From bad to worse as tsunami/...

Indonesia: From bad to worse as tsunami/quake death toll jumps over 1400, now a volcano erupting 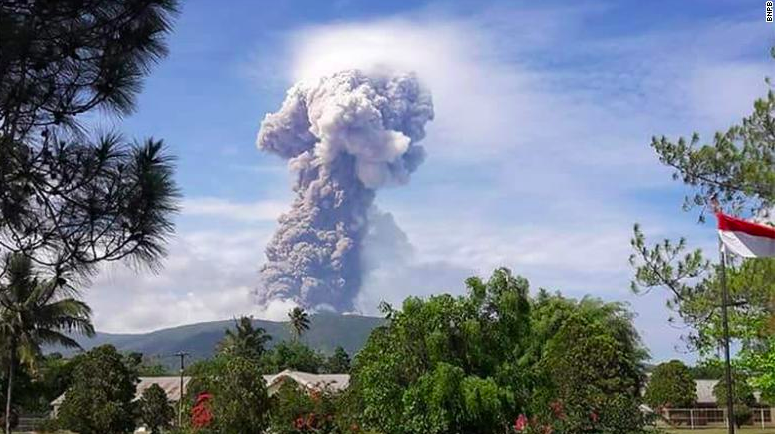 There could be just days left to rescue the remaining trapped survivors of Friday’s earthquake and tsunami, Indonesia’s disaster agency said Wednesday, as the already-high death toll continued to grow.

But a volcanic eruption just north of the disaster zone, the third severe tectonic event in Indonesia in less than a week, has highlighted the difficult task facing authorities in the geographically unstable region.
Mount Soputan, in the northern part of the island of Sulawesi, erupted just before 8 a.m. on Wednesday (9 p.m. Tuesday ET), according to Indonesian disaster agency spokesman Sutopo Purwo Nugroho.
The ash cloud rose four kilometers high over the devastated island, but so far the local airport remains open and no evacuations have been required, Sutopo said.

Mount Soputan in northern Sulawesi, Indonesia, is seen erupting on Wednesday.
The eruption hasn’t yet slowed rescue efforts in Palu, where Sutopo said authorities were only just within the seven-day window in which there is a chance survivors “still exist.”
It gives rescue crews less than two days to finish combing the rubble for possible signs of life.
The death toll jumped again on Wednesday, rising to 1,407 amid warnings from authorities that the casualty count is expected to rise even further as search efforts continue.
“So many bodies haven’t been recovered yet,” Willem Rampangilei, head of Indonesia’s National Board for Disaster Management, told reporters on Tuesday.

– View much more on this story here, including video reports via CNN