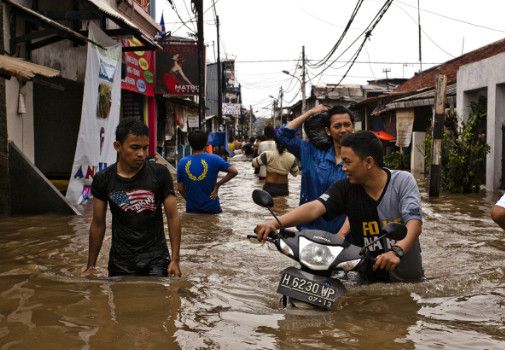 Heavy flooding in the Indonesian capital this week has killed 15 people, driven thousands from their homes and paralyzed the sprawling city — and officials are warning that more water is on its way.

With around 95,000 people affected in different areas of the city, authorities have declared a state of emergency to allow use of national funds and other resources. About 19,000 people have relocated from the worst affected districts to safer areas.

January is typically the wettest month in Jakarta, the political and economic capital of southeast Asia’s largest country.

But the low-lying city has already experienced more rainfall since Tuesday than it usually gets in the entire month of January.

Amid about a foot of water, workers scrambled Friday to clean up the mess near where a dike had burst a day earlier, flooding the central business district.

Soldiers heaped sandbags on a railroad line to form a makeshift defense close to the dike.

The situation in the central district appeared to be improving, but some of the worst-hit areas of the city remained under water, with more flooding expected to arrive over the course of the day.

A lot of the water falling in the vicinity of Jakarta, which has a population of around 10 million people, must go through the city’s rivers and canals before reaching the Java Sea.

Thousands of people have fled their homes in neighborhoods along the banks of the Ciliwung River, the cause of some of the worst flooding and considered by many to be one of the dirtiest waterways in Indonesia.

In Kampung Melayu, an eastern neighborhood near the Ciliwung, many people remained at home Thursday, sitting on top of roofs or wading inside to try to salvage belongings and secure the premises.

Large amounts of water were expected to flow down the Ciliwung on Friday, generated by rains over the hilly area around the city of Bogor, which lies south of Jakarta.

The Meteorology, Climatology and Geophysics Board has warned of more heavy rainfall in the next few days, the city government said.

Fresh flooding was likely to bring the risk of more casualties.

The National Disaster Mitigation Agency said nearly half of the 12 killed in the floods since Tuesday were electrocuted.