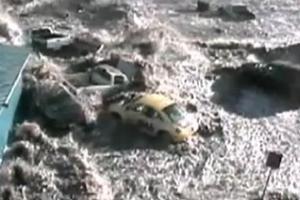 The toll climbed to 413 dead and 298 missing four days after a magnitude 7.7 earthquake struck off Indonesia’s coast, triggering a tsunami, officials said Friday.

The National Disaster Coordinating Agency said 270 people were seriously injured and 142 had minor injuries. More than 22,000 people have been displaced or affected by the tsunami, which swept up villagers and their homes without warning, the agency said.

The government is considering relocating some residents in the earthquake-prone islands near Sumatra, the state-run Antara news agency said.

Click here to see CNN’s latest video on this disaster

“President Susilo Bambang Yudhoyono has instructed me to draft a government regulation related to the relocation plan. We will discuss this matter soon after the emergency response period and rehabilitation of the impacted area are over,” said People’s Welfare Minister Agung Laksono.

It’s been difficult to protect Indonesia’s small islands with a tsunami warning system, but most of them will be covered by February 2011, said Sutopo Purwo Nugroho of the Indonesian national board for disaster management. The effectiveness of a warning system also would depend on the size of a tsunami and residents’ proximity to it.

On the country’s hard-hit Mentawai Islands, at least six of the 27 villages were “practically been flattened,” state media said, citing the governor of West Sumatra.

The quake struck at 9:42 p.m. Monday, triggering a tsunami warning. Its epicenter was 240 kilometers (150 miles) south of Padang, at a depth of 20.6 kilometers (12.8 miles), according to the U.S. Geological Survey. The magnitude was revised from a preliminary 7.5.

The remoteness of many Indonesian islands left residents without warning, and continued to limit communications and stymie rescue and recovery efforts.

Medicine and supplies being used to treat hundreds of injured residents are being depleted, Antara reported.

On Friday, four warships from the naval base in Padang, West Sumatra, were to arrive to offer aid to victims in the Mentawai islands, according to Antara.

The ships were carrying medical supplies and medical personnel from the marines, Antara said, citing Col. Indarto Budiarto. Volunteers, a helicopter and a plane also were aboard the ships.

The naval base in Padang had set up aid command posts in the Mentawai waters, as well as medical command posts for victims, Antara said. A cargo plane also was ferrying supplies.

The colonel also asked aid donors to channel supplies through the base in Padang.

“We are trying to prevent the accumulation of aid for Mentawai,” he told Antara.

The United States will provide $2 million in humanitarian assistance in response to this week’s tsunami and the eruption of the Mount Merapi volcano, which killed dozens and displaced thousands, the U.S. ambassador in Indonesia announced Friday.

The funds will be used to purchase relief items and help displaced people resume their lives, Ambassador Scot Marciel told students at the University of Indonesia, the embassy said in a statement.

Earlier Friday, the European Commission announced it was offering 1.5 million euro ($2.1 million) to help the victims of the tsunami and the volcano eruption.

“This envelope will help around 65,000 people in Mentawai and at least 22,000 people in Yogyakarta/Central Java,” the European Commission said in a news release.

“Humanitarian partners will use these funds to provide water and sanitation to victims; access to primary health care and disease control; food and nonfood items; emergency telecommunications, emergency shelter; psychological support; logistics and will mainstream disaster preparedness,” the release said.

The city of Padang and the Mentawai Islands are at the meeting place of two tectonic plates, making them vulnerable to earthquakes and tsunamis.

On December 26, 2004, a 9.1-magnitude earthquake struck off northern Sumatra. A tsunami generated by that earthquake killed more than 225,000 people in 14 countries — mainly India, Indonesia, Maldives, Sri Lanka and Thailand. The Indonesian region of Banda Aceh was hard-hit: About 150,000 died there.