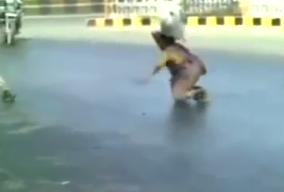 A severe heatwave has set off new records in India, so much so that the roads beneath pedestrians are literally melting like wet cement.

In the footage below, pedestrians’ footwear can be seen actually sinking into the tarmac as they walk due to how hot it is.

For farmers in particular, the effects have been widespread and devastating, worsening poverty and even prompting suicide.

The Indian government has estimated that as much as 25 per cent of the country – 330 million Indians – could be affected by the shortages.

Temperatures in the northern desert province of Rajasthan have soared to 51C, the highest in the country’s recorded history, and the third-highest temperature ever documented on Earth.

Temperatures across much of northern India have exceeded 40C for weeks. With much of the country densely-populated, this only makes the problem worse.

Murari Lal Thanvi, a man from Phalodi, in Rajasthan, told the BBC the weather alone was hot enough to render his mobile phone unusable.

“Even my mobile phone gave up and stopped working when I was trying to take pictures today,” he said.

“I was able to switch my mobile phone on after putting a wet cloth on it for about 20-25 minutes.”

Told farmers that committing suicide is no solution. Assured them that together we will improve things & make our agriculture sector shine.

But this has now gone beyond minor inconveniences and a bit of physical discomfort. The impact of the heat has been devastating, and increasingly fatal, particularly for the hundreds of people dying of starvation due to withering crops in their remote fields.

Tens of thousands of farmers have had no other option but to abandon their land and move into the cities.

Meanwhile, suicide among farmers is on the rise thanks to the extreme environmental conditions. According to the Indian Express, 36 farmers in the drought-ridden region of Marathwada have committed suicide this past week alone.

They reported that over the past four and a half months, the total figure of suicides has been put at 454. Officials said the collective total in the past 16 months has reached 1548.

Officials told the Press Times of India that there is a mere one per cent of water left in the region’s dams.

Extreme weather conditions obviously present huge problems for farmers. In this case, withered crops are forcing tens of thousands of them to abandon their land and homes to move to the urban cities.

Extreme droughts, unseasonal rains and poor yields have left them with crippling debt and even greater poverty. For some, it would seem death is the only option.