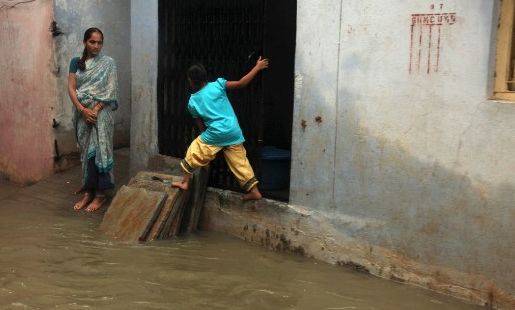 Flash floods swept Saturday through the eastern Indian states of Odisha, where at least 19 people were killed, and Andhra Pradesh, where another 21 were killed, CNN-IBN reported.

“The flood water entered our village suddenly,” one rescued villager told Reuters. “We tried to save our belongings but could not. At last we ran away to a safe place. Now the problem is we don’t have food to eat and are staying under open sky.”

But a local Puri government official, Madhusudhan Das, said help was under way.

“We have arranged for dry fruits and have also taken efforts for evacuation,” he said. “We have arranged free kitchen for them. Tickets will be provided to them. We will give them house damage assistance. Houses have been damaged on a large scale. We are trying our level best to finish the huge amount of work within a week and we’ll also provide them assistance for house damage.”

In all, 13 districts in Odisha were affected, P.K. Mohapatra, special relief commissioner, said in a telephone interview.

Most affected was the Ganjam District, where 85,000 people were evacuated, he said.

“The situation is very grim as the entire Delta area is completely inundated,” Guntur district Collector S Suresh Kumar told CNN’s sister network. “Drains and tanks are overflowing and there is a threat of breaches occurring at some places because of the nonstop rain.”

Flooding led officials to cancel the fifth of a planned series of seven One Day International cricket matches between India and Australia.