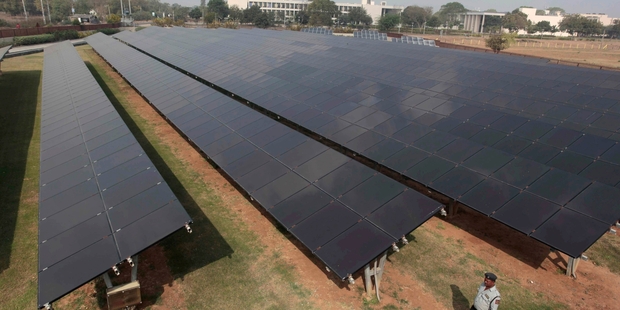 But what looks like a looming crisis could turn out to be an almost accidental energy overhaul.

India has relied for decades on cheap coal to provide electricity for burgeoning industry and fast-expanding cities, putting aside worries about pollution and global warming.

But from three years ago when solar capacity was almost zero, the country has added 2.2 gigawatts of solar to its electricity grid, enough to power 20 million Indian homes. It plans another 2GW this year, toward a total 15GW addition by 2017. Individual states plan even more.

India has also added about 26GW in coal-fired capacity since 2011, but already plants are sitting idle for lack of cheap supply.

“There’s not enough coal, and I’m not going to rely on imported coal. It’s too risky.”

After building two coal-fired plants due to start generating this year, Hindustan Power plans to invest nearly US$3 billion ($3.57 billion) to expand its 350 megawatts of solar generation to 1GW by 2017.

Coal India, the monopoly producer, is too large and unwieldy to do any better. Much of the country’s easy-to-access surface coal has been extracted, with the remaining reserves harder to reach – underground, beneath cities or within national parks and tiger reserves.

New projects can take almost a decade to get going thanks to village protests, bureaucratic entanglements and trouble securing fuel.

Meanwhile, more than 300 million people still have no electricity, while hundreds of millions more are lucky to have a few hours a day.

Coal-fired thermal power remains the bulwark of India’s energy supply, accounting for 59 per cent of the nation’s 234GW generation capacity. India still has ambitions for another 70GW in coal capacity by 2017 if it can find the investors.

But for the first time, solar electricity prices have fallen to near parity with India’s coal-generated power prices, with solar prices at about 7 rupees (13c) per kilowatt/hour, versus coal’s 5-6 rupees per kilowatt/hour.

Solar projects also need fewer clearances and take just six to 12 months to develop, versus about eight years for a coal plant. Analysts say India is set to pass its target of having 15 per cent of its energy produced by the sun and other minimally polluting sources by 2022.

“Today’s coal availability is inadequate. And investors are worried. In India, if there are coal shortages, there will be power shortages, and industrial growth will be inhibited,” said Vivek Pandit, senior director at the Federation of Indian Chambers of Commerce and Industry.

India’s coal bind is in part a product of its bounty. Declaring the world’s fifth-largest coal reserves, India invested heavily in coal-fired power as a low-cost way of boosting energy production.

For a while, the formula worked. Energy capacity doubled over the past 10 years, while economic growth averaged above 8 per cent.

The coal-power recipe also helped to jump-start economic development in China, Indonesia and other developing countries. But it has come with a heavy toll.

India is suffering from water shortages and toxic runoff from a host of polluting industries, including coal.

Emissions of sulphur dioxide, which lead to acid rain and lung ailments, increased more than 60 per cent in India between 2005 and 2012, surpassing the US to become the world’s second highest SO2 emitter after China, according to Argonne National Laboratory which analysed Nasa satellite data.

The Reserve Bank of India warned in a 2013 report that power cuts and coal shortages were “a major constraining factor for industrial growth”.

India’s current account deficit hit a record US$88 billion last year, made worse by a trade bill bloated by US$18 billion in coal imports.

“If India stays the course it’ll be a disaster,” said Tim Buckley, an analyst at the Sydney-based Arkx Investment Management which runs a green energy fund.

“It’s so ugly at the moment. But it’s always darkest before the dawn.”

China and the US, the world’s No 1 and 2 carbon polluters, are already winding down coal dependency.

The US closed 138 coal plants in 2011-13 and plans to retire another 150 soon, according to the Union of Concerned Scientists.

In China, where investment in solar infrastructure has helped bring down prices, coal consumption had its lowest growth in 50 years last year at 2.6 per cent, according to the China Energy Agency.

For India, “if we constantly focus on wind and solar, our country will be energy-sufficient in the coming future”, said Tarun Kapoor, a senior official in the Renewable Energy Ministry.

Analysts say it would take several decades for India to replace its thermal power base. The International Energy Agency estimates India will need to at least triple its total power capacity before 2050, adding between 600GW and 1200GW.

But coal may be a diminishing part of that. In February, 28 per cent of the country’s coal plants had fuel stocks to last less than a week, according to the Central Electric Authority.

“Solar is the way to go,” said Puri, the Hindustan Power chairman. “Eventually the policy makers always wake up.”

*2.2 gigawatts of solar added in three years by India.

*Target for 15% of power from minimally polluting sources by 2022.