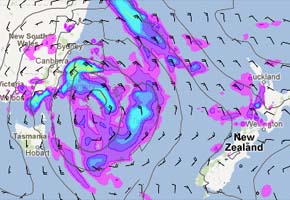 Another low pressure system is set to move into and deepen in the Tasman Sea this weekend however thankfully unlike the last few depressions that have come over New Zealand this one will be shorter lived.

WeatherWatch.co.nz forecasters are keeping an eye on the incoming system, Weather Analyst Aaron Wilkinson says “This incoming low is set to move into the Tasman this weekend then move across the country on Monday before moving offshore out to the east on Tuesday and Wednesday, the low isn’t being held up by a blocking high like the last few systems and is instead this time being nudged out of the way by an anticyclone coming in behind it”.

Some rain is set to affect the west of the North Island on Saturday while sunnier weather lies out east, during Sunday wet weather becomes a little more widespread however the east coast of the North Island and Southland may remain dry. On Monday and Tuesday the flow changes to the southwest bringing showery conditions to the country.

Mr Wilkinson goes on to say, “The heaviest falls are looking to be from Taranaki down through to the top of the South Island and about Buller on the West Coast during Sunday, sodden parts of Canterbury and Otago will escape the heavy rain this time round although there will be some wet weather in the form of showers early next week in the east of the South Island”.