Home > News > Incoming high could be game changer for ...

Incoming high could be game changer for sodden NI 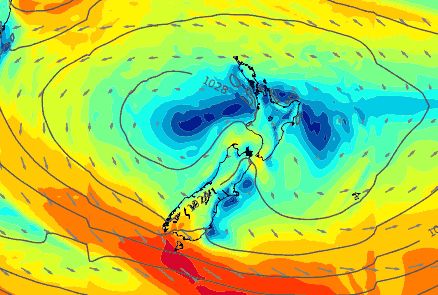 The second half of January should be drier, warmer and more settled than the first half of the month, that’s the prediction by WeatherWatch.co.nz this weekend.

The weather news authority says an incoming high, which should start to push in today, will drop anchor over the North Island and central New Zealand – and most models agree it favours more summer-like weather.

WeatherWatch.co.nz head weather analyst Philip Duncan says the incoming high looks to be a game changer.  “Since the very start of summer all the highs have been focused over the central or lower South Island.  It’s the location of these highs that has brought wet weather and easterlies to the North Island while near-drought conditions have been developing in the deep south”.

Mr Duncan says the incoming high will bring better weather to campers, especially in the upper North Island.  “Every high this summer has tracked over central and southern New Zealand and that’s brought cloud and easterlies to the north – and plenty of rain.  This next high – and quite likely the one after it – look as though they will be more North Island focused, settling down the weather there while at the same time making the deep south more vulnerable to change”.

Conditions may not be perfectly sunny for everyone, with still a 20% to 40% risk of a shower at some stage next week, but that is considerably lower than recent weeks which have frequently had 60% to 80% most days.

WeatherWatch.co.nz says the new high is looking strong but some data shows showers may return at the end of the week or next weekend as the new high departs and the next high is yet to move in.  It’s possible there may be a few unsettled days in between the two systems.

But the better weather may be too little too late for many New Zealanders, who return to work this Monday.

However for those yet to go on holiday the long range maps do show new highs moving in – and also taking a similar path over central and northern New Zealand.

As for February, it’s still too far out to be sure says WeatherWatch.co.nz.  However the weather news authority does predict hotter weather in February – but with the same risk of sub-tropical rain makers.

*Please note, we’ll issue an Auckland anniversary weekend forecast this coming week – in the meantime keep an eye on our weather maps page to track wind, rain, swells and temps over the next 14 days.

Even though in Auckland,how about a Wellington one as well for next weekend,its not only Wellington but Waiarapa,Wanganui and Manawatu areas included in it.

“However the weather news authority does predict hotter weather in February”. Gosh really, who would have thought? 😉