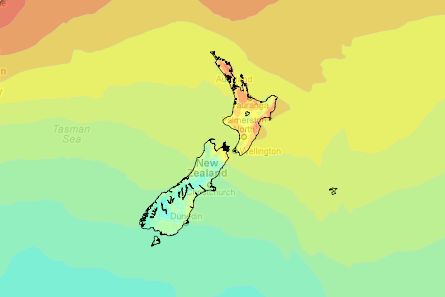 A significant cold change will develop this weekend pushing down temperatures by several degrees below average in a number of areas – but there is good news, it will be short lived predicts WeatherWatch.co.nz.

The weather news authority says the southerly change will arrive in Southland on Sunday and move up to Wellington by Monday affecting southern and eastern coastlines of both islands – from Invercargill to Gisborne.

Head weather analyst Philip Duncan says although conditions will be cold for January, the southerly blast will be short lived for most places.  “We will have a low and a high working together to create this southerly change – but that same high will also kill it off on Tuesday and Wednesday as it pushes across the country settling the weather down”.

Mr Duncan says the worst of the winds will be in the lower South and North Islands in the form of a strong to gale force southerly or south westerly.

“It arrives early on Sunday morning in Invercargill, then moves into Dunedin.  It will push into Christchurch during Sunday turning the warm nor’westers into a cold, blustery, southerly then it will reach Wellington and Masterton either later on Sunday or into Monday, before heading further into Hastings, Napier and Gisborne in a more weakened state on Monday and Tuesday”.

Invercargill is expected to reach only 13 degrees on Sunday while Dunedin and Christchurch may only reach 15 on Monday, along with Wellington.

Southerlies will likely peak in Southland on Sunday, then peak around central New Zealand on Monday and Gisborne region on Tuesday, again in a weakened form the further north you head.

The new high will roll in as early as Monday night in Southland – and that means overnight lows will drop to the low to upper single digits.

As for regions north of Taupo, a south west wind is expected over Monday or Tuesday with temperatures slipping by a couple of degrees, but nothing significant.

WeatherWatch.co.nz says snow is still likely down to about 1000m in the South Island over Sunday and Monday.

Philip Duncan says the incoming high next week should linger over the country for the rest of January as another anticyclone (high) merges with it, however it may show signs of weakening in the upper North Island in the last few days of January, meaning an increased risk of brisk easterlies and cloud cover.

– Homepage image / The temp map as of Monday shows plenty of blue over the South Island while the upper North Island remains relatively mild.