Images: Florida at night from space 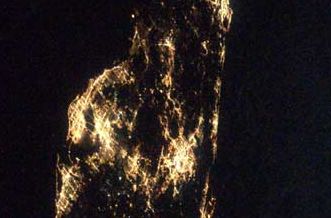 This photo was taken by NASA astronaut Douglas H. Wheelock on Nov. 1, 2010.

It is a picture of the Southeastern United States at night with the state of Florida taking front stage.

Wheelock is currently orbiting Earth on the International Space Station (ISS) as a member of the Soyuz TMA-19 spacecraft and commander of the Expedition 25 crew.

As the ISS orbits, Wheelock has taken numerous snapshots of the blue and green planet, including cities and famous landmarks that dot the sphere.

He is uploading his individual photos onto his personal Twitter page via twitpic.com. All of these images are courtesy of NASA, Wheelock and twitpic.com.

Scroll down to see where each main city is…