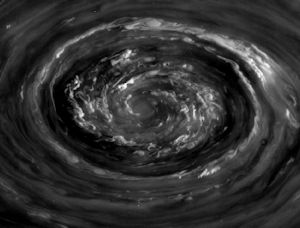 Incredible photos of storms on Saturn were sent back to earth this week from NASA’s Cassini Spacecraft.

The images show the spectacular vortex photographed on Tuesday from a distance of about 400,000 kilometres above Saturn.

The Cassini spacecraft has been traveling the Saturnian system in a set of tilted, orbits that give mission scientists a vertigo-inducing view of Saturn’s polar regions. This perspective has yielded images of roiling storm clouds and the swirling vortex at the centre of Saturn’s famed north polar hexagon.

NASA says this is not the first time a storm like this has been photographed by Cassini.  In 2008, a similar storm was captured over the south pole.

The Cassini mission to Saturn began with its launch into space on 15 October 1997, arriving at Saturn for the first time nearly 7 years later on 30 June 2004.