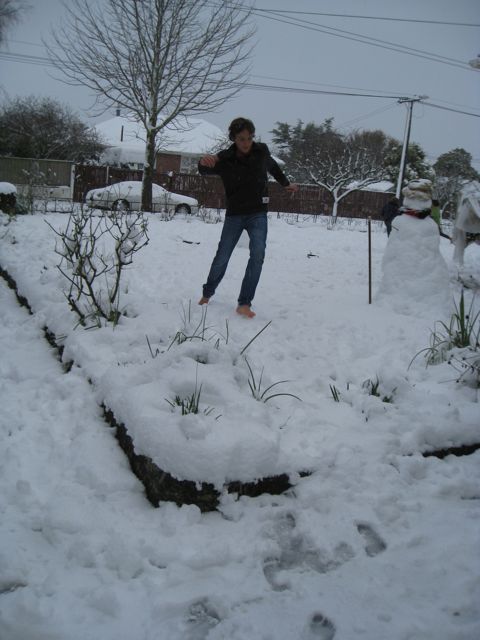 With the arrival of the southerly yesterday, temperatures took a king hit and the windchill factor made it feel well below freezing.

Quite a few readers on weatherwatch.co.nz mentioned the icy winds whether it was snowing or not and the winds are likely to hang around for some time yet.

This polar outbreak is feeling even colder due to gusty conditions and they are tending more southerly or even southeasterly with peak winds in eastern areas expected to be near gale force for a day or 2.

Weather Analyst Richard Green says “Yesterday in Christchurch the first of the winds hit about 1 o’clock and although there wasn’t much sleet or snow, the wind caught quite a few peoples breath with its icy tongue”.

Snow is expected to fall in many eastern and southern areas again today with Wellington a chance of more falling today while Dunedinites enjoyed some good falls yesterday with the chance again of more today and tomorrow.

Christchurch residents mostly missed out on a fall yesterday but some falls did occur overnight.
The next 24-48 hours show significant falls are still quite likely as the wind slowly changes direction to allow more into the city and region.

Provincial areas in the South island saw some snow with the heaviest falls recorded in parts of South Otago, Central Otago and the Southern Lakes District with Frankton near Queenstown reporting up to 30cm in places.

Temperatures are likely to struggle much above 4 or 5 degrees in eastern areas of the South Island today and with the wind added in, it will feel closer to freezing or below for most of the day.

White as in Southbridge. Power just came back on. Been off for 3hrs. Very beautiful a winter wonderland

We are situated in rural Hawera/Kapuni. Weve had a heavy dumping of snow in the last few hours, a lot more than we did in July. The wind factor is making this a lot colder even though the temperatures are reading slightly higher according to Metservice! The kids are going to be very excited when they wake up 🙂 Husband who has to tend to the cows and calves…not so happy!

Its been snowing off and on in tai tapu (chch) through the night, we have about 5 inches of snow cover currently. where we are its only 5.0 metres above sea level so can only imagine what the Port Hills will be like. Really like your website very informative, accurate and kept up to date