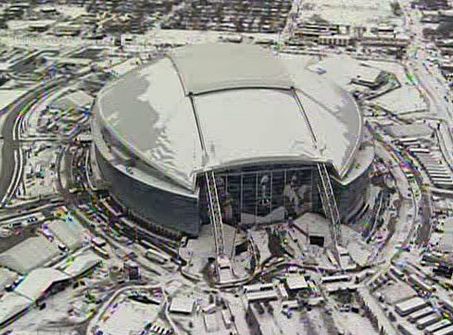 A deep freeze across America’s South appears to have dampened the pre-Super Bowl fun for fans gathering in the Lone Star State.

Salt spreaders and plows rumbled through Arlington, where sub-freezing temperatures hung in the air amid a mix of debilitating sleet and snow that canceled hundreds of flights Friday, raising questions about whether the Super Bowl host was ready for the rash of inclement weather.

Arlington Mayor Robert Cluck gave the most direct response to critical out-of-towners who showed up days ahead of Sunday’s big game, calling their chilly assessment a Super Bowl-size case of sour grapes.

“They’re probably jealous,” Cluck said. “Everybody is going to be able get in and out easily. So I don’t pay any attention to that.”

“When you drive around here right now, there’s nothing going on,” Warner said. “It’s like the city is dead, which you don’t expect Super Bowl week.”

The big game will be played in Cowboys Stadium — a domed arena with a retractable roof.

Ice and snow slid off the stadium roof Friday and caused injuries to workers below, authorities said.

Gusty winds on the south side of the stadium sent ice falling up to 15-20 metres from the stadium, striking contract employees, according to fire department officials.

One man was struck in the head by ice and was in stable condition at John Peter Smith Hospital in Fort Worth, said Lt. Pedro Arevalo of the Arlington Fire Department. Five other men and women had minor injuries, he said.

All stadium entrances have been closed except for an adjacent truck tunnel, which workers and visitors will exit through as a precaution, said NFL spokesman Brian McCarthy.

“The ice should be melted off tomorrow,” Arevalo told CNN Friday night, describing the hard freeze as extremely unusual.

While Dallas Fort Worth Airport was open, although with reduced traffic, neighboring Love Field Airport in Dallas was closed until Friday afternoon, officials said.

In Dallas, icy roads forced schools and some government offices to close earlier this week, said mayoral spokesman Frank Librio, who appeared undeterred by the weather.

“We have been planning for this for a whole year,” Librio said of Sunday’s match-up between the Green Bay Packers and the Pittsburgh Steelers. “We’ll be ready.”

Both teams and their fans are cold weather clubs, accustomed to the frozen tundra of Lambeau Field in Green Bay, Wisconsin, and Heinz Field in Pittsburgh.

Forecasters say the sub-freezing temperatures are likely to be gone by game day, when a high of 7C degrees is expected.

While the weather outside won’t exactly be balmy, the day might be remembered fondly three years from now.

The New Meadowlands Stadium, co-owned by the New York Giants and the Jets, won the bid to host Super Bowl XLVIII in East Rutherford, New Jersey. Fans may then be forced to don winter gloves underneath their giant foam fingers while inside the open-air stadium in what could be the first true cold-weather Super Bowl.

The big game has always been played in either domed stadiums or traditionally warm-weather states.

The 1967 “Ice-Bowl,” in which Green Bay eked out a 21-17 win over the Dallas Cowboys in the 35th National Football League championship game, was played amid teeth-chattering temperatures at Lambeau Field.

The Packers then traveled to the warmer climate of Miami to defeat the Oakland Raiders 33-14 in Super Bowl II.