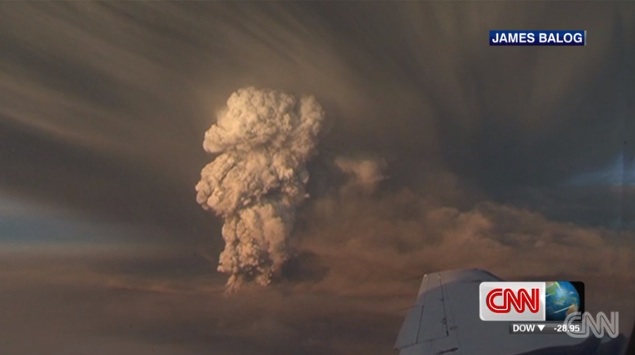 Iceland closed the airspace near the Bardarbunga volcano on Saturday, warning that significant emission of ash into the atmosphere is likely.

The Icelandic Meteorological Office raised the aviation alert at Bardarbunga to “red,” which means that eruption is imminent or in progress.

The new alert follows the latest report from the meteorological agency, which found that a small sub-glacial volcanic eruption has started under the ice cap of a glacier there.

In response, the national commissioner of the Icelandic police put his agency in an emergency phase, CNN affiliate Iceland 2 TV reported.

The underground activity did not immediately result in changes to volcanic activity on the surface, the agency said.

Because of a pressure from the glacier cap it is uncertain whether the eruption will stay sub-glacial or not, Iceland 2 TV said.

Scientists have noticed an increase in seismic activity around the volcano, located in the northwestern region of Vatnajokull glacier, one of Europe’s largest glaciers, over the past seven years, the Meteorological Office said.

The level dropped a little after the eruption of another volcano on the same glacier, Grimsvotn, in 2011, but has since picked up again.

According to the Smithsonian Institute Global Volcanism Program, Bardarbunga last erupted in 1910.

If it should blow its top again, it could be bad news for travelers.