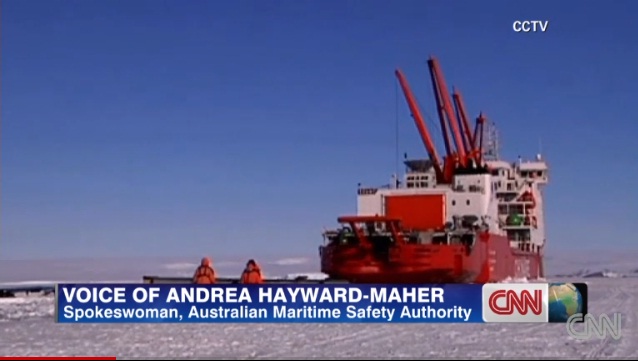 A Chinese ship trying to reach a trapped expedition vessel in Antarctica has now become hampered by ice itself.

The Chinese icebreaker Xue Long, or Snow Dragon, was just six nautical miles away from the Russian-flagged vessel when it became obstructed by heavy ice. Even the icebreaker could not break through the floe, the Australian Maritime Safety Authority said Saturday.

“We have been waiting for better weather and ice conditions since last night,” Zhao Yanping, second captain of the Xue Long, told CNN. “Xue Long is not moving forward but we’re not stuck.”

The Chinese crew was hoping a French icebreaker that was also en route would be able to assist. But by midday Saturday, the Australian maritime authority called off the French ship’s mission.

But AMSA said another icebreaker, the Australian Aurora Australis ship, is still en route and is expected to arrive late Sunday.

The rescue icebreakers were battling the planet’s coldest environment in trying to reach the stranded Russian ship MV Akademik Shokalskiy, whose 74 researchers, crew and tourists remained in good condition despite being at a frozen standstill since Monday.

It all shows that some lands — especially the ends of the Earth — may never be tamed.

The Russian expedition ship is carrying scientists and passengers led by an Australian climate change professor. But they may have to wait another day or two to be freed, said Capt. Wang Jiangzhong of the Snow Dragon.

“Right now we are waiting for winds to blow ice away so we can move closer,” Wang said. “The current ice condition is exceeding our capabilities to break through further.”

The captain also acknowledged his ship may need help from the other icebreakers headed to the area if conditions deteriorate.

“We are in continual communication with the (stranded) ship,” he said in a satellite phone call with CNN. “I think it’s at least a form of emotional relief for them to know we are nearby to help. We know that they (passengers) are all doing well on that ship.”

The Snow Dragon has ample supplies of water, food and medicine — even a helicopter — if the ice-bound Shokalskiy needed them, said Zhu Li, chief officer of the Chinese ship.

Meanwhile, spirits were high Friday aboard the Akademik Shokalskiy.

“The vessel is fine, it’s safe and everyone on board is very well,” expedition leader Chris Turney, a professor of climate change at University of New South Wales in Australia told CNN. “Morale is really high.”

It got stuck in the ice on Monday night — 15 days after setting out on the second leg of its research trip.

According to Turney, the ship was surrounded by ice up to nearly 10 feet (3 meters) thick. It was about 100 nautical miles east of the French base Dumont D’Urville, about 1,500 nautical miles south of Hobart, Tasmania.

On Christmas morning, the ship sent a satellite distress signal after conditions failed to clear.

The crew had a “great Christmas” despite their situation, Turney told CNN. He said crew members have used the delay to get more work done.

The expedition is trying to update scientific measurements taken by an Australian expedition led by Douglas Mawson that set out in 1911.

The expedition to gauge the effects of climate change on the region began November 27. The second, and current leg of the trip, started December 8 and was scheduled to conclude with a return to New Zealand on January 4.

Turney said the ship should still be back in New Zealand on time.

Seems fresh show has fallen, not looking good for rescue!