‘I really thought it’d be bigger’: The battle to save the holy water of the Jordan River 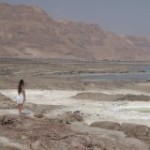 The pilgrims who come to be baptised in the waters of the Jordan River at Qasr el Yehud are often overcome with emotion at visiting one of Christianity’s holy places.

But they can’t help noticing the river is smaller and dirtier than they expected.

“I really thought it’d be bigger, not so muddy-looking,” tourist Cathy Fura, from the US, said.

Polish priest Lukas Laskewicz, who was visiting with his congregation, was similarly surprised.

“When we see the Dead Sea or the Sea of Galilee, we see they need water, it’s still down.

Today’s Jordan has just 5 per cent of the river’s historic flows.

The rest is taken for farming and domestic use.

The pilgrims might not splash so happily if they knew the remaining water was a mix of raw sewage, treated effluent, runoff from fish farms and salty discharge from natural springs.

Around the visitor area of Qasr el Yehud, landmine-clearing operations are underway.

The explosives are a legacy of the conflict between Israel and Jordan, which fought over the valley and the West Bank in 1967.

Today the land is claimed by Palestinians as part of a potential independent state.

Israel controls most of the watershed and distributes some water to Jordan as part of a peace treaty.

It’s increased the amount of water in the river by adding treated sewage from a plant near the Sea of Galilee, where the Lower Jordan River begins.

Yechezkel Lifshitz from Israel’s Energy, Infrastructure and Water Resources Ministry said the Government is also building a pipeline to bring desalinated water from the Mediterranean to the Sea of Galilee, which has fallen close to record low levels.

Jesus is said to have walked on water at the Sea of Galilee, but after five years of drought, every visitor now has to walk a long way before reaching the waves.

“In the Middle East, especially in Israel and also in our neighbours, we don’t have as much rain as we did in the past.”

At the Jordan River’s southern end, the Dead Sea is at risk of living up to its name.

Nadav Tal, from the environmental group Ecopeace, said its surface is dropping by 1.35 metres each year as the river fails to top it up.

“It’s disappearing slowly and this is an ecological disaster that we are responsible [for], and the Jordan River is part of the solution of rehabilitating the Dead Sea as well, because that’s the main source of water to the Dead Sea,” he said.

The consequences are dramatic Ã¢â‚¬â€ huge sinkholes are forming as the water recedes and mineral salt underground dissolves, destroying resorts and infrastructure on the edge of the sea.

A plan called “Red to Dead”, an agreement between Israel and Jordan to pump water from the Red Sea to the Dead Sea, was meant to help save it, but it has stalled because of its cost.

Mr Tal said Ecopeace had prepared a regional plan to restore water to the river system, which emphasised that fixing the Jordan Valley’s environmental problems would require cross-border cooperation.

“It’s so urgent we’re calling for the governments of Israel, Palestine and Jordan to come together and look at the masterplan and see how we can save the Jordan River and the Dead Sea,” he said.

Homepage image: Sinkholes are forming on the Dead Sea shoreline as the water recedes. – ABC