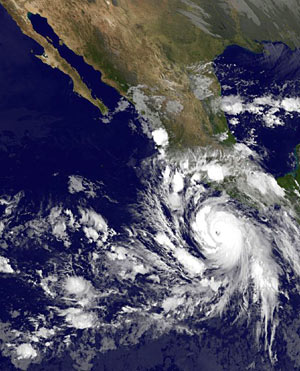 Hurricane Rick, the strongest eastern North Pacific storm in more than a decade, raged across open seas yesterday, but forecasters said it could veer into resorts at the tip of the Baja California Peninsula by midweek.

The track of the Category 5 hurricane threatened to disrupt a major sport fishing tournament scheduled to start Wednesday in Los Cabos, where hundreds of fishermen — mainly Americans — were gathering.
The hurricane’s winds were still a howling 175 mph (280 kph) yesterday, down slightly from a peak of 180 mph (285 kph), according to the U.S. National Hurricane Center in Miami. But it was projected to move over cooler waters and weaken to around Category 2 status with winds of around 98 mph (156 kph) before hitting land.
The eye was centered about 500 miles (805 kilometers) south-southeast of Cabo San Lucas.
Rick was moving toward the west-northwest at about 14 mph (22 kph) and it was expected to begin turning toward the northwest over the coming 48 hours before curving toward the northeast, the center said.
It’s still far from clear where the storm will hit land, but the early forecast path would take it almost directly into Cabo San Lucas, where as many as 800 sports fishermen were expected to take part in the Bisbee’s Los Cabos tournament, with about 130 boats scheduled to set off into the Pacific on Wednesday — the day Rick is projected to hit.

Forecasters said Rick could carry enough force to continue past the peninsula and slam into Mexico’s mainland as a hurricane somewhere near the resort city of Mazatlan on Thursday.
Rick was the second-strongest hurricane in the eastern North Pacific since 1966, when experts began keeping reliable records, said Hurricane Center meteorologist Hugh Cobb.
The strongest was Hurricane Linda, which generated maximum winds of 185 mph (296 kph) in September 1997.
“Rick is probably going to go into the record books as one of the most rapidly intensifying hurricanes,” Cobb said.

The storm was generating some waves up to 50 feet (15 meters) high near its core, Cobb said, adding there were ship reports of 16-foot (5-meter) seas elsewhere off the Mexican coast. Rick was also expected to send large sea swells against Mexico’s Pacific coast .
The first inhabited land in Rick’s path is Socorro Island, about 300 miles (500 kilometers) southwest of Cabo San Lucas. The island is a nature reserve with a small Mexican Navy post and it hosts scuba-diving expeditions in winter months.