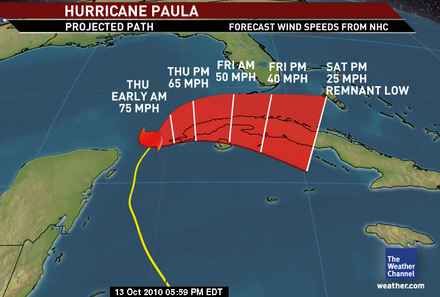 Hurricane Paula is moving towards Cuba and the Florida Keys today.

Weather.com brings you the latest.

The depiction may make you pose the question “What is causing the system to turn from a northerly heading and make a sharp turn in the general direction of Cuba the next couple of days?”

The answer is the atmospheric pattern over the eastern portion of the nation and the Caribbean.

On Tuesday, Paula was heading north around the western edge of high pressure in the Caribbean and Atlantic as shown on the graphic below.  Through late week a dip in the jet stream will form in the eastern U.S. while another band of strong winds aloft covers the Gulf of Mexico.

This incoming jet stream dip will be a “blockade,” directing Paula more eastward with a track in the general direction of Cuba and the Florida Straits.

At the same, increasing wind shear and possible land interaction from Cuba will lead to gradual weakening Thursday through Friday.