Home > News > Hurricane Maria knocks out power to all ...

Hurricane Maria knocks out power to all of Puerto Rico, population 3.4 million 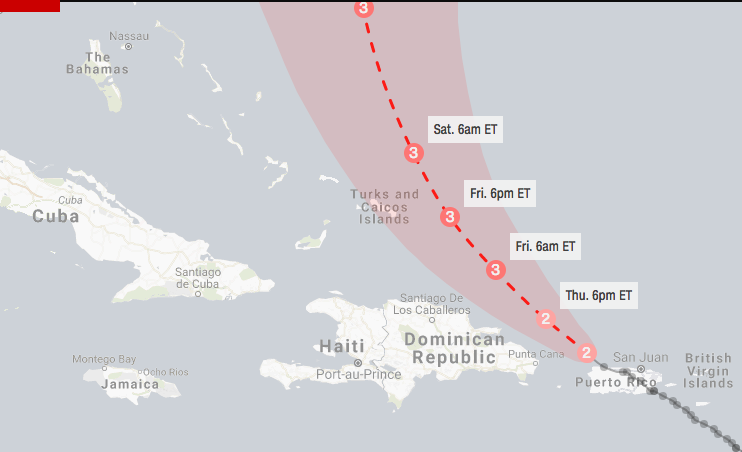 By Philip Duncan — The population of Puerto Rico is just over a million fewer than New Zealand, at 3.4 million, and everyone there has lost power following Hurricane Maria overnight/this morning.

Puerto Rico is a densely populated country and is just 160kms east to west wide and 50kms north to south. Tiny for such a big population. All of Puerto Rico and the 3.4 million people would fit inside Northland, New Zealand – with room to spare, that’s how small the nation is.

Hurricane Maria made a direct hit late last night in the south east and is only now starting to clear away to the north west.

When Maria came onshore last night the eye had begun to wobble a bit and change shape. This weakened the storm a tiny amount, but enough to drop from Category 5 to Category 4 (but only weakened by a few kilometres an hour).

This heavy populated island nation was then slammed for several hours with sustained winds of up to 250km/h and gusts even higher. Rainfall totals were forecast at 120mm an hour with half a metre of rain expected, causing huge fears of landslides and flash flooding on top of the wind damage.

Not only has Puerto Rico been hit, but Maria has crippled many other islands nearby. CNN says Maria is the worst storm to hit Puetro Rico in 85 years.

Today, Maria is crossing the track of Irma from just a couple weeks ago and may strengthen again. Maria is currently a Category 2 hurricane with *sustained* winds of 180km/h and gusts over 200km/h.  Cat 3 is again likely today as the storm moves back out of open waters. Smaller islands, already devastated by Irma, are next in the firing line before the storm should head out into open, cooler, waters and slowly fade like Hurricane Jose has done.