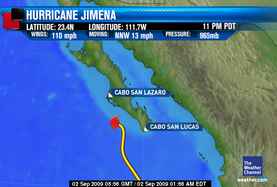 Tonight NZT Hurricane Jimena was located west-northwest of Cabo San Lucas, Mexico. Maximum sustained winds have lowered to near 180km/h, which is still very strong, making Jimena a low-end category 3 hurricane. Jimena should continue to gradually as it interacts with land and with cooler waters off the western Baja coast.

Jimena is moving to the north-northwest; this motion is expected to continue. Jimena is expected to approach the southern coast of the Baja Peninsula by Wednesday, and be near or over the central Baja Peninsula Wednesday night or early Thursday. The worst wind and rain will miss Cabo San Lucas, although damaging wind and torrential rains are still expected.

Residents and visitors of southern half of Baja California should be finishing their preparations for a major hurricane. A dangerous storm surge, damaging winds, battering waves and heavy, flooding rains are all possible.

Impacts from Jimena will be felt along mainland Mexico as well. Dangerous rip currents, large and battering waves and heavy, flooding rainfall are expected.

The waves and rip currents are occurring from Manzanillo northward, while the heaviest rain should fall from Mazatlan north.

Flash flooding and landslides are most likely over the mountains.