Home > News > Hundres of thousands without power after...

Hundres of thousands without power after “snowmageddon” 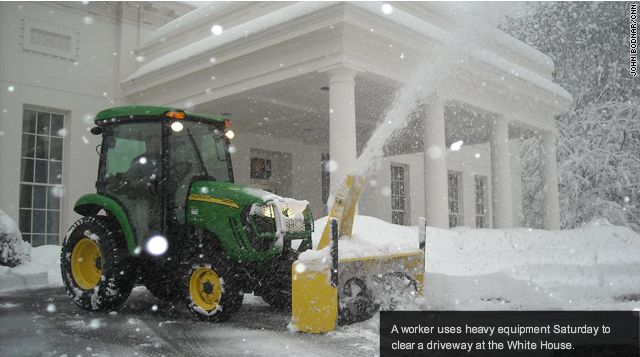 Air traffic in Washington picked up after a day of cancellations, but hundreds of thousands along the Eastern seaboard remained without power after a major snowstorm wound down.

More than 300,000 people from Pennsylvania to Virginia were without electricity Sunday morning, utility companies reported. The blizzard — referred to as “snowmageddon” by President Obama — brought down power lines across the region, and accumulated snow continued to cause outages.

“Since the heavy, wet snow is still bringing trees down, we are still seeing new outages occur,” Allegheny Power said in a statement Sunday. “Damage assessment is ongoing, but overall estimated times for the restoration of service have not been determined.”

The utility company provides electricity to customers in Pennsylvania, Maryland, West Virginia and Virginia. More than 142,000 of its customers had no power; the majority of them, more than 90,000, reside in Pennsylvania, the company said.

More than 20,000 residents in Delaware were without power Sunday morning, utility companies there said. Wilmington reported a whopping 67cms of snow, the National Weather Service said.

In New Jersey, nearly 60,000 Atlantic City Electric customers had no electricity, the company said; 49cms of snow blanketed Atlantic City. More than 128,000 people in Virginia, Washington and Maryland were without electricity, according to utility companies in those areas.

The quick-falling flakes forced Dulles to cancel all flights Saturday. Flights were also canceled at the other two main Washington-Baltimore area airports.

With the snow behind it, Dulles reopened Sunday to limited service, according to Rob Yingling, spokesman for Metropolitan Washington Airports Authority. A United Airlines flight that landed at 7:15 a.m. was the first to land at Dulles, he told CNN.

Airport terminals at Reagan National Airport were open, but flights were still grounded, the airport said. Travelers were advised to confirm their reservations before heading to airports.

Amtrak canceled several trains Sunday after downed trees and power lines fell onto portions of its tracks, the transit company said. Dozens of Greyhound routes in the mid-Atlantic states were also canceled, the bus company said on its Web site. State officials have advised drivers to stay off the slick roads.

The storm caused two fatalities Friday, when a father and son died in a car accident in Virginia’s Wythe County, state police said. Virginia state police said the accident was one of many crashes and disabled cars reported.

In addition to car wrecks during the storm, collapsing roofs also became a worry. In Washington, the roof of Joshua’s Temple First Born Church collapsed Saturday because of snow, although officials said no one was injured. It was one of a couple of similar incidents, Washington Mayor Adrian Fenty said Saturday. The walls of the church had buckled as well, and authorities trudged through the knee-deep snow to put up police tape around the area.