Home > News > Humpback whale washes up on remote SI be... 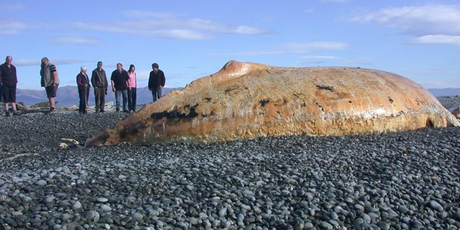 A dead humpback whale spotted off the Timaru coast about two weeks ago has now washed up on the boulder beach between the sea and Lake Wainono, near Waimate.

It was found about 3pm on Sunday by Gary Bruce, as he drove a tractor between two farms.

At first from a distance, because of the shape, he thought it was the yellow hull of an upturned fishing boat. But, as he got closer, and walked over to it, he realised it was a whale.

The skin had fallen from the carcass and the jaw had become exposed, but the whale was sitting upright with its fins extending out into the shingle.

Yesterday, representatives from the Waihao runanga visited the whale, with Anne Te Maiharoa-Dodds saying a karakia (prayer) for its spirit.

Waihao Runanga manager Steve Boyd hoped, with the approval of the Department of Conservation, the runanga could have some pieces from the whale.

In particular, he wanted the jaw bone which could form a gateway to the Waihao marae at Morven.

The marae had some whale pieces, including teeth, from the remains of a sperm whale washed along the beach in a similar position about 15 years ago.

Geraldine-based Doc biodiversity ranger Steve Harraway said a humpback whale had not been washed up on the South Canterbury coast since he had started working with the department in 1988.

”We have had the odd whale before, but most have been baleens [filter-feeders]. This is the first time I’ve seen a humpback,” he said.

He inspected, measured and took details of the whale yesterday. It was 13m long, and wider than it would have been alive because the carcass had settled.

He could not say for certain when it came ashore, but estimated it was probably within a few days of being found.

He was “pretty sure” it was the same whale carcass reported about two weeks ago by a Ministry of Fisheries observer on a fishing boat about 2km off Timaru.

Mr Harraway said at that stage it was already losing skin and the jaw bone had moved forward.

Because the whale is in a remote location, well away from any houses, it would probably be left on the shore “for nature to take its course”, rather than buried or removed.

Discussions would be held with the runanga to see what needs it might have.

“People should not touch it because they can carry a lot of bacteria,” Mr Harraway said.