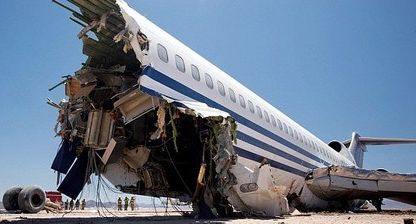 Those in economy have better odds, study finds, but NZ experts say every crash is unique.

Economy-class air passengers sitting in the back of the plane are more likely to survive a crash, according to a new study – but experts in New Zealand say the initial impact is only the first horror survivors face.

Researchers crashed a Boeing 727 airliner into the Mexican desert to find out what happened to crash-test dummies inside.

The nose section was destroyed, but the aft area stayed in one piece.

The study supports similar analysis of commercial airline crashes in the United States, which show more people in the rear of the planes survived than those at the front.

New Zealand experts have contested the findings, saying no seat is safer than another because each crash is different.

The chief investigator at the Transport Accident Investigation Commission (TAIC), Tim Burfoot, said even if you survived the crash, chances are the fire would kill you.

“The latest test that they’ve done, driving the plane into the ground, is just one of many different scenarios.

“There are so many different factors – the type of plane, whether it’s a higher wing or a lower wing … whether there was a post-crash fire, which is usually the big killer,” Mr Burfoot told the Herald.

The 727 carrying sensors, dozens of cameras and crash-test dummies was deliberately crashed in a remote part of a Mexican desert.

When the jet hit the ground, the front of the plane and the first 11 rows of seats were ripped off.

Experts involved in the British programme concluded all of the first-class passengers would have died. After analysing footage of the dummies, they also said that a passenger in the brace position with seat-belt fastened would have survived the impact.

One which was not in the brace position would have suffered severe head injuries, while one not wearing a seatbelt would have died.

The findings are similar to a 2007 study conducted by the Popular Mechanics magazine that reviewed all plane crashes in the United States between 1971 and 2007.

Survival rates in the rear seats were deemed to be 69 per cent as opposed to 56 per cent over the wing and 49 per cent for those at the front of the plane.

TAIC investigates the survival rates of all plane crashes in New Zealand. Mr Burfoot admitted this was a very small sample, but said it had not found any evidence to confirm that a seat at the back of the aircraft was safer than one at the front.

In the Dash 8-102 in 1995 at Palmerston North, passengers in the middle were in the most danger.

In the 2009 Air France disaster, the whole plane was at risk because the aircraft fell flat after stalling, Mr Burfoot said.

“There are just too many variables to say that yes, you are safer sitting in the back.”

A spokesman for the authority’s principal safety adviser on air transport said the experiment in Mexico appeared to be subjective.