How hurricane forecasters develop the ‘cone of uncertainty’ 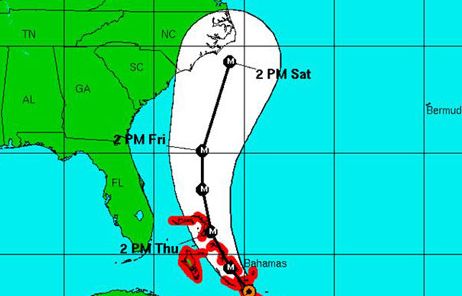 This story was posted by friend of WeatherWatch.co.nz Dave Hennen – CNN senior meteorologist.

It sounds like something out of the Austin Powers movies or Robert DeNiroâ€™s “circle of trust” in the Focker movies. But in the world of hurricanes, the “cone of uncertainty” is the area where the serious winds, storm surge and all the other things that come along with a hurricane are possible.

You’ll see the cone in the image above. The image shows the National Hurricane Center’s prediction, as of 5 p.m. Wednesday, of where the hurricane could go over the next three days. The “cone of uncertainty,” representing where forecasters think the hurricane’s center could go, is in white.

The hurricane center, located near Miami, is tasked by the National Weather Service and the National Oceanic and Atmospheric Administration to constantly watch the tropics and warn when tropical waves and disturbances grow into organized low-pressure areas known as tropical depressions. When tropical depressions develop, the hurricane center starts issuing advisories on the system.

Sophisticated models running on some of the fastest computers in the world ingest data from satellites, ship reports, radar (if it is available), and data from weather balloons, airplanes and weather stations. Literally billions of calculations are done with very complex equations to help model the atmosphere into the future. More than 20 different kinds of models are run â€“ some being more reliable and complex than others â€“ to help forecast the track and intensity of the storm. You may have seen one of our meteorologists show the “spaghetti” maps on television depicting a storm’s possible paths, or seen the plot maps on cnn.com/hurricane.

Forecasters use this model data â€“ along with real-time information obtained by satellite, radar, observation and hurricane hunter planes that fly right into the center of the storm â€“ to help the hurricane center issue an official forecast track. That forecast track, issued every six hours, shows where the storm is expected to go over the next five days and how strong the storm may be.

Even I, as a meteorologist, know that weather forecasts are far from perfect. The hurricane center, which keeps records of every track it issues, is aware of that fact as well. The hurricane center figures out what its average error is at various forecast horizons – 12 hours, 24 hours, 48 hours, etc. – to help it generate the â€œcone of uncertaintyâ€ on its forecast track (the white area on the map).

The cone basically shows that the center’s 12-hour forecast position is, on average, 36 miles off. At 48 hours, it is around 100 miles off.

So, let’s say that I live in City X, and the storm is forecast to pass 100 miles to the south of me two days from now. I have nothing to worry about, right? Wrong. Because the average error at 48 hours is 100 miles, the storm could be right over me in two days.

This is why meteorologists and emergency managers will constantly preach not to look at the line on the forecast track, but to look at the “cone.” If you are inside that area, you could end up in the direct path of the storm.

Because the atmosphere is so complex, errors from a particular forecast become larger over time. So the cone is much smaller at 12 hours than at five days out, because we know that on average, our short-term forecasts are much better.

So as Hurricane Irene approaches, remember not to focus on that line you see on the forecast track maps. Instead, look at the â€œcone of uncertainty.” In the end, the storm may go anywhere in that area.