Hot & humid with some downpours this long weekend in the north 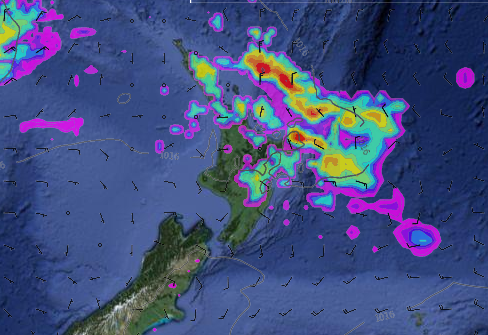 The top half of the North Island, which includes almost half of New Zealand’s population, has a long weekend this weekend – and the weather looks hot and humid with downpours spreading down from the tropics.

While ex-cyclone Victor will be well away from northern New Zealand this weekend the low has left a new weather pattern behind it – one that allows tropical northerlies to pour down over the upper North Island.

This means there’s a large pool of tropical air over Northland, Coromandel Peninsula, Auckland, Waikato and Bay of Plenty – and also over into Gisborne/East Cape and northern Hawkes Bay.

Winds will be light – and the showers will grow in size each afternoon in the heat.  In other words, the heat is going to trigger heavier downpours and the light winds means they may move quite slowly, leading to ‘showers’ turning to ‘rain’ (when the shower lasts longer than 30 minutes).

Each day the incoming high (over the South Island and lower North Island) will affect the flow of these showers – potentially keeping many out at sea, and shifting their placement from Saturday to Sunday to Monday.

We are not expecting 3 days of rain, but there may be a fair bit of cloud around the north.

At this stage Saturday and Sunday have the highest chance for downpours – Monday looks drier and sunnier at this stage.

To get your heads around it better check out the RAIN MAPS here.

On Monday February 1st a large high should be covering most of New Zealand – with light easterlies in the upper North Island continuing.

If you’re heading away camping fingers crossed the heaviest downpours miss you!  Keep an eye on our rain maps – and Philip Duncan will have a video update later today on the weekend set up.

Oh – and if you’re heading to the lower North Island or South Island the cooler change there will be fading by the weekend with more average temperatures returning and mostly dry, sunnier, conditions under a building high.

NELSON
It’s also Nelson’s Anniversary Weekend this weekend – all three days look dry, getting sunnier, with highs around 23 or 24 degrees and lows around 13 or 14.