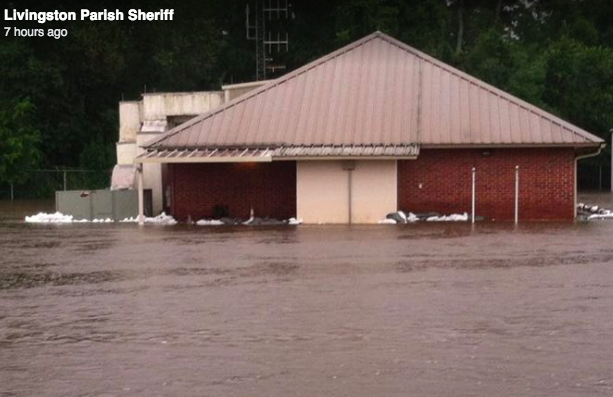 Louisiana Gov. John Bel Edwards called the widespread flooding spawned by the region’s pounding rainfall across the southern part of the state a “truly historic event” that won’t be over anytime soon.

The rainfall battered the parishes around Baton Rouge and is expected to move west, he said at a news conference Saturday.
There are record levels of flooding and cresting along rivers and creeks that will affect homes, roads, and driveways, he said.
“This is a major disaster,” the governor said. “This is an ongoing event and we are still in the response mode.”
The governor said at least two deaths have been confirmed and searches are being carried out. Initially, as flooding news emerged on Friday, CNN reported three deaths.

More than 1,000 people have been rescued from cars, homes and elsewhere from swift-moving floodwaters and more than 100 pets have been rescued, Edwards said.
The Louisiana National Guard said it has approximately 1,000 soldiers on the ground assisting in search and rescue, that number will increase to 1,200 to 1,250 by the end of the day Saturday.
Also deployed were 170 high water vehicles, 20 boats, and five helicopters.
At least 18 parishes have declared emergencies, the governor said, with three in the process of doing so.
This is in addition to the state of emergency Edwards declared on Friday. It remains in effect until September 10.
He said people living in areas where they’ve been asked to evacuate should heed warnings and people should stay off the road.
There are about 16 shelters open. Power outages have been reported and roads, including portions of Interstate 10 and others, have been closed. There are over 100 roads closed throughout the state.
The Red Cross is already distributing food and water to shelters
The state is preparing to ask for federal help in recovery efforts when it determines damage estimates but for now, the governor said, it and the parishes are handling the response efforts.
Water got into the governor’s mansion, and Edwards said the electricity has been turned off as a precaution. The office moved its operations to a state police facility farther north.
James Waskom, director of the governor’s office of homeland security and emergency preparedness also briefed reporters on Saturday.

The round-the-clock vigilance of rescue teams and police played out Saturday in parishes across central and southern Louisiana, from the Mississippi to Texas borders.
One example of such activity is Livingston Parish, near Baton Rouge..
As the rain pounded the Bend Road area of the drenched parish early Saturday, Livingston sheriff’s deputies worked to get the word out to several hundred people along that stretch: Get out now if you can.
This is a “life-threatening situation,” sheriff’s office spokeswoman Lori Steele said in a TV interview.
She gave instructions to people on where to meet up with deputies who can transport them to shelters. The department’s social media went into action to inform people about what to do.
“Our main goal is no loss of life.”
Livingston Parish President Layton Ricks issued another warning, about the Amite River corridor.
“The Amite River is continuing to rise at a rapid rate and will continue to do so. If you live on the Amite River corridor it is urgent that you make plans to evacuate your home immediately,” he said.

Flash flood warnings were issued by the National Weather Service offices in New Orleans and Lake Charles on Saturday morning for portions of several parishes and heavy rain was reported.
Rain in some spots was beginning to diminish.
“Excessive runoff from heavy rainfall will cause flooding of small creeks and streams,” the Lake Charles office said.
The New Orleans office said “life-threatening flooding is occurring over a large area.”
“This is a particularly dangerous situation. Seek higher ground now.”

No break in the rain for a while

CNN meteorologist Derek Van Dam said Baton Rouge received twice the amount of rain in one 24-hour period than it normally receives in the entire month of August. The average for August is 5.82 inches, he said.
Some rainfall totals have exceeded 20 inches. Livingston has received 21.29 inches from late Thursday until early Saturday, he said.
One river, the Tickfaw, rose 20 feet in 14 hours, breaking a previous crest record by more than three feet, he said. He said other rivers are reaching record flood stages.
“The heaviest rain is behind us,” Van Dam said. “I don’t see any break in the weather until early in the week next week. The rain will continue and ease by Tuesday.
The ground is extremely saturated, he said, and any additional rainfall is going to cause more flooding. He said the moisture is going to spread east and north into the Ohio River Valley.
In Livingston, the sheriff’s office had to move its 911 communications center to another location — the emergency operations center in the parish government building — because it had been taking on water, the parish sheriff’s office said in a statement..
“For hours, deputies have been handling an extremely high call volume and have been able to keep floodwaters at bay. Unfortunately, the floodwaters have proved to be too much,” the statement said. There’s been “no interruption in services.”
Louisiana State University in Baton Rouge announced that the school is closed. It said in tweets that “LSU streets are impacted by water. Please stay away from campus if possible.” and that LSU “Football Fan Day and Media Day” on Sunday are canceled.
View image on Twitter

Todd Voight, 31, who lives behind Brandon’s Appliances in Amite, checked on his home and the store he runs with his brother Brandon.
Both took on water, but were not severely damaged. “I’ve never seen water like this,” said the lifelong Amite resident.
CNN spoke with Todd Voight, 31
Sandy Morgan, 34, was rescued by boat Friday night along with his family and returned home Saturday morning to survey the damage.
He told CNN he built the home six years ago, and only got flood insurance six months ago. “Thank God,” he said.