High to the east, low to the north 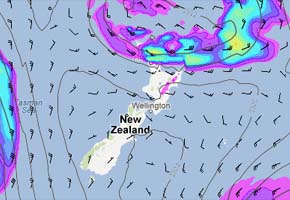 This pattern means an east to northeasterly airflow gets funnelled over the country, and while it will be sunny in the east of the South Island tomorrow it won’t get as warm as it did today due to cooler winds coming off the sea. The east coast of the North Island will get some increasing cloud tomorrow and showers developing north of Gisborne in the evening.

Our main feature for Thursday is the low north of New Zealand, this will bring rain to Northland and perhaps into Auckland at times. In the Waikato the risk is fairly low of any showers but there may still be one or two make it through. The heaviest rain will be in Northland mainly in the east tomorrow and perhaps eastern parts of Coromandel, then overnight and into Friday morning about northern parts of East Cape.

Amounts are not looking too bad though with 15 to 25mm expected in eastern Northland and perhaps Coromandel, 5 to 10mm about northern East Cape.

Temperatures not overly warm in most main centres tomorrow. The warmest high’s will go to towns from southern Taranaki through to Kapiti along the west coast of the North Island and in Southland in the South Island as those areas will be more sheltered from the east to northeasterly airflow, expect temperatures around 15 perhaps 16 degrees in those places.