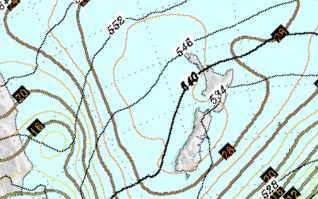 A strong high pressure system has today spread itself right across New Zealand putting an end to strong winds and clearing away almost all shower activity.

The high, which has moved in from the Tasman Sea, has a few low level clouds with it which will mainly affect the western coastline.  It’s possible a few lingering very light showers will remain in some western areas, possible around the Waitakere Ranges and a few other coastal areas near the Tasman.

However the majority of Kiwis will enjoy a mostly sunny, mild, day today.

But the anticyclone will be short lived, with a frontal system and developing low moving hot on its heels to the west.  Strengthening northerlies are expected in Southland later today or overnight tonight with gusty winds moving across southern and eastern parts of the South Island during Friday.

Most main centres will remain dry for the next 24 to 48 hours.

Another good reason about reasoning the SW in Auckland.

“It’s possible a few lingering very light showers will remain in some western areas, possible around the Waitakere Ranges and a few other coastal areas near the Tasman”