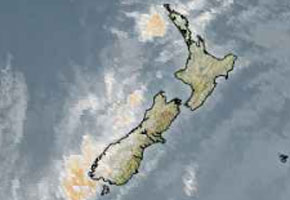 Our anticyclone that has delivered sunny weather for the weekend is sadly now moving away, as it departs we have a fairly keen northeasterly airflow over the country with increasing cloud mainly in western regions with some sunny weather still remaining out east.

A few showers are affecting Northland currently and also just getting into the West Coast of the South Island, it is windiest in Christchurch with northeasterlies at 37 km/h gusting to 44 km/h. Consequently temperatures in Christchurch and along most of the east coast in the South Island a fairly cool due to that brisk northeasterly. The places to be for warmer temperatures are the bottom of the South Island in Southland, it is 16.5 there are present. And then the bottom southwestern corner of the North Island, Levin for e.g. is on 16.8 degrees.

Both those areas are warm as they are sheltered in a way from the northeasterly airflow.

There hasn’t been much rainfall over the past 24 hours anywhere really although soon that will change with showers now starting to get into the West Coast of the South Island, but for now only some parts of Northland have received a millimetre or two.