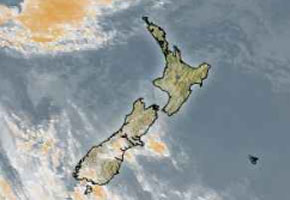 Well it certainly isn’t getting to 17 degrees at this rate in Christchurch today. There is plenty of haze about and high cloud, pollution levels over the last few nights have been very high, a simple look outside shows this haze
across the city. The 24 hour average on the 18th July was 77 micrograms per cubic meterand for the 19th it was 94. A high pollution night is anything recorded over 50 so yesterdays reading is nearly double the highest ideal level which is very high. The 24 hour period is measured from midnight through to midnight the next day. A cold night creating an inversion helps to aid in the formation of pollution, also a lack of wind.

Not all Cantabrians are feeling a little cool as it is in Christchurch at the moment, inland in Darfield it is currently 17 degrees with a northwesterly breeze, Ashburton is on 16 degrees.

The North Island is experiencing pleasant temperatures and light winds for most although fog this morning has kept it cool in some inland places. Areas of cloud are along the east coast north of Auckland with easterly breezes a little gusty at times, some cloud also about East Cape.

High cloud for the east of the South Island again today, temperatures for Dunedin and Christchurch as mentioned earlier are not overly warm but getting into the mid teens in places inland where there is a northwesterly influence. Nelson currently has light winds and some high cloud, a temperature right now of 14 to 15 degrees depending where you live.

Some cloud on the West Coast south of the Glaciers with drizzle in Fiordland, sunny breaks further north.

Christchurch will probably be around 13-14 max over the weekend due to NE unless the NW can break through.

Metservice are saying a high of 14 for Christchurch. I think they’ve been too optimistic with the temps for many SI places. I see Ashburton is now 13 ‘officially’

In fairness LM I put 17 for Christchurch today, yesterday evening hence why I started this article off like this. When I came to update today I could clearly see it wasn’t going to get there so dropped it down. Temperatures can be hard one to predict at certain times like with all aspects of weather. We’ve done fairly good this week but today it wasn’t a nice mild one at all in Chch.

Temperatures holding up a little longer late this afternoon as some sun from the west beams in.