Home > News > High moves in but nights shouldn’t be to...

High moves in but nights shouldn’t be too cold 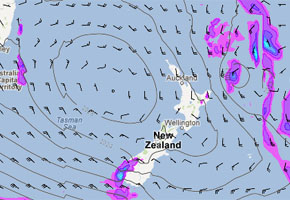 An anticyclone is approaching from the Tasman Sea ready to move over central and northern areas of New Zealand tomorrow. While it will bring frosty nights for some in sheltered inland areas, they won’t be as bad as the previous frosts that had happened with the last anticyclone.

The reason being is the air masses associated with each high are a bit different, more simply the previous high had colder air associated with it, with low levels of moisture. The high about to move over us isn’t as dominated by cold air, also it is moving more over central and northern areas of New Zealand. In fact the Central North Island and Waikato are looking to get colder nights this time round then Central Otago will, Otago will have a northwesterly airflow over the region while up north winds will be light to calm from Tuesday night through to Thursday night. Later in the week Otago could get frostier nights though as the isobars spread out for a time and calmer conditions settle in.

Auckland should remain frost free this time round, it’ll get a little cool on Wednesday and Thursday mornings but will only get down to 5 degrees at the lowest. Christchurch looks set to remain above zero with this high aswell, during the week 2 or 3 degrees looks to be the lowest temperatures on the cards during the nights, maybe getting a bit cooler on Saturday morning later in the week.