High in the Tasman for the rest of next week 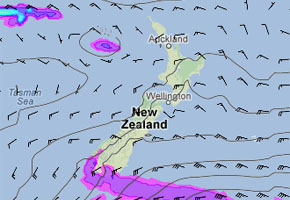 For the rest of November the same area of high pressure is likely to sit in the Tasman Sea with a west to southwest airflow lying over the country. A few fronts will work their way north over New Zealand during this time but most are not very strong, the main ones being tomorrow Monday then another couple later next week on Friday.

Therefore eastern parts of the country will experience the better weather coming up while in the west there will often be days plagued by cloud.

Extreme forms of weather are mostly out the door however westerly quater winds from time to time will be strong about the Southland coastline and in Cook Strait.

Not till early December will some systems get a little more active to the southwest of the country and have enough boot power to kick away the high lurking in the Tasman Sea.

…won’t make much difference to Auckland’s weather either way every which way…highs, lows and inbetweens dish out the same old.