Home > News > High gets the squeeze on from the south ...

High gets the squeeze on from the south today 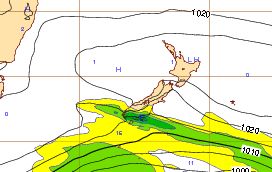 Like someone pushing their finger into the side of an inflated balloon a front will today push into the high currently over New Zealand – and while it won’t pop it, it will let some air out.

The fronts, associated with a low well south of NZ in the Southern Ocean, will bring in rain and showers later today and overnight for Southland and parts of Otago.

The isobars will also squeeze up over the South Island and central parts of New Zealand.   Gales are unlikely for most places but they are possible about Stewart Island and through the Southern Alps.  Those brisk winds will also build around Wellington later today and early Thursday.

But by the end of Thursday the high will start to inflate once again – and Friday and Saturday both look more settled, ahead of the next low which will develop around Sunday or Monday in the Tasman Sea.