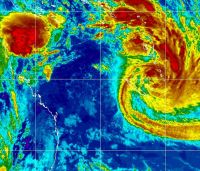 Cyclone Season around Australasia kicks off in November and lasts until April, but many consider this time of the year to the be true beginning of the season – and judging by current conditions we can now expect to see numerous cyclones appearing around Australia and the islands north of New Zealand.

WeatherWatch.co.nz says currently we have two active tropical cyclones and a third in the making – two of which may affect our weather. 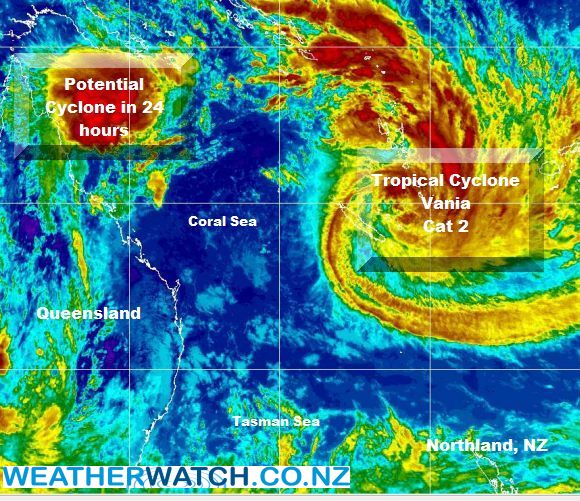 Tropical Cyclone Vince, a category 1 cyclone to the north west of Australia, should make landfall in the coming days on the remote west coast.

Tropical Cyclone Vania, now a strengthening Category 2 cyclone, will hit New Caledonia on Friday then very slowly move towards New Zealand mid next week.  It’s unclear if the cyclone will keep cyclone strengh winds by the time it moves here.

But that’s not all folks.  Today we have a new cyclone developing north of Queensland.  The tropical depression is predicted to become a tropical cyclone overnight tonight NZT according to the Bureau of Meteorology, although it’s unlikely to impact the the flooded Queensland state – and may actually add fuel to Tropical Cyclone Vania moving towards New Zealand.

The track of this smaller future cyclone is that it will move into the Coral Sea and either fall apart or merge with Vania.

WeatherWatch.co.nz says that February and March are usually the peak months for cyclones and with warmer than average waters north and north west of New Zealand we can expect to see plenty of tropical depressions in the coming months.

The risk of a tropical cyclone hitting New Zealand is now rated as “elevated” according to NIWA.

WeatherWatch.co.nz will bring you the latest news on the South Pacific and Australian cyclone season over the coming months

Hey Phil,
Just wanted to say what a great website this is, I enjoy reading your updates everyday, its so accurate and you never over-dramatise anything. Just wondered, I know there isnt much certainty yet but do you guys think Cyclone Vania will be anywhere as strong as Cyclone Bola or Drena were?

Thanks for your comments.  We try very hard to not over-dramatise potential storms… and take a fairly conservative approach to quite a few things.  Some mistake our early warnings about potential storms as being alarmist but we’re simply wanting to share what we can see in the models, just like all the Forecasters around the world do!

At this stage we don’t think this is shaping up to be a Bola – the models are picking Vania to move through fairly quickly.  Bola caused the major flooding because it hung around for days.  This is probably more in line with Drena as far as angle of attack and current location goes.   But it’s far too early to draw comparisons.

I’ve studied Atlantic hurricanes for many years and there’s one thing I can be sure of – no tropical storm is ever the same as another.

If Vania tracks down the west coast the risk of flooding will be greatly increased to NZ.  If she tracks down the east coast (probably slightly more likely) then the flood risks are reduced, as the heaviest rains are usually in the south east quadrant of these lows.

Hey Phil,
Thanks for that, it was a big help. This will be the first tropical storm I will experience so I was curious as to what it will be like. Thanks for all your help!

If it weakens significantly it may just be a wet, humid day like many others we have.  The problem with cyclones is that they are notoriously unpredictable once they leave the tropics and start crossing cooler waters between here and the tropics.