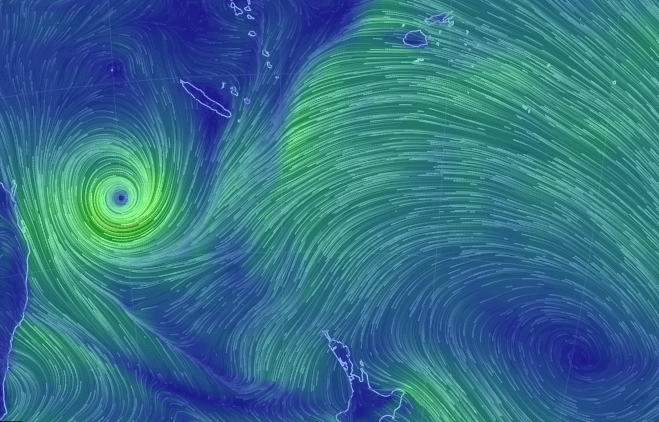 At midnight last night, in bedrooms all over the upper North Island in particular – but also spreading further south – it was very warm and humid.  Air temperatures in the low 20s, humidity in the late 80s and 90s, feels like temperatures in the mid 20s.  It was a warm night with little wind. Many would’ve been thankful today was Saturday with no early work start.

The humid northerly air flow behind ex-cyclone Winston means sub-tropical air that normally lies between Northland and Fiji is now starting to spill down over the nation.

It means the next couple of days – and nights – will be warm and muggy, particularly in northern coastal areas as this flow peaks.

It’s this warm sub-tropical humid air behind the ex-cyclone that will meet cooler southern air over the North Island later today and over Sunday and Monday bringing localised heavy downpours – triggering new heavy rain bands draped over parts of the North Island and slow moving due to a blocking high to our east.

WeatherWatch.co.nz will be tracking these downpours as they flare up this weekend and early next week.

In the meantime – as the sun rises higher today, expect the ‘feels like’ temperature to rocket into the low to mid 30s across many northern regions.

Some people love this weather – it feels like ‘true summer’ whereas others find humidity awful, ‘stifling’ and hard to motivate yourself to do even the smallest of tasks.

How do you find this more humid weather? Love it or hate it?  Post a comment and let us know!

Love the pretend 30C temps that Auckland gets.  Meanwhile, on the east coast it is another actual 30C+.  February has been warm and dry out east.  Imagine if Auckland really got to 30C!!!  There would be up to the minute updates to keep the country informed as they got close.  You can keep your wet weather though.  I wonder which town/city has the most time over 30C each year?  Probably not possible to assess that too easily.  Would be interesting though.

I’m on Auckland’s North Shore and love the humidity.  It isnt as hot/humid as some countries I have been in, so I find it quite bearable.  When the humidity goes, so has summer and I always feel very sad about that, as I am a hot weather person.  Perhaps because I was born and bred in Auckland, humidity just seems part of my life.

Had to have been the longest, hottest, muggiest Summer i can remember here in Auckland, just seems to go on and on. Totally and utterly horrible, no wonder i loathe people who spend all year talking about how they ‘cant wait for summer’ lol.

Love the warmth, don’t like the humidity. You described it spot on, hard to motivate, can’t get anything done!!

My bananas, papayas, cherimoyas and monsteras love this weather, but as someone who runs a little hot normally, this weather is not fun. Still, I did choose to live in the Far North…

I am in Whangarei and yes the humidity is high. I do not feel like doing much at all and everything I am doing is taking a heap of motivation. My wife loves it having lived in a tropical clime for a good many years. Dog is out of it too, just lazing around..

For me it depends on how high it is and what temperature level we have at the time. Here it is already 25 with a feel like of 28 according to Met Service local info. Will get hotter as day goes on and when the rain comes in could become very hard to handle. Not really a fan of it so be happy as soon as it’s gone.