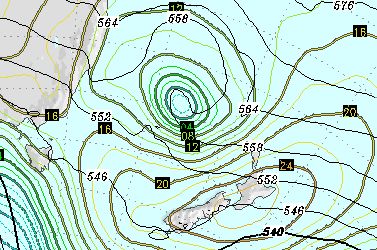 La Nina may have ended but New Zealand can’t seem to shrug off the persistent big rain makers coming in from the north west – and this weekend will be no different predicts WeatherWatch.co.nz forecasters.

The low, which has already formed just off the New South Wales and Queensland coastlines, will slowly slip further into the Tasman this week.  A large anticyclone currently over Victoria and Tasmania will remain to the south of the low – and is expected to do three things.

Firstly the high should cover the South Island by Thursday, bringing frosty weather to many places overnight.  Secondly the high will spread out to the east of New Zealand during Friday – slowing down the rain bands as they move in from the north west later in the day (and increasing the chances of rain warnings being issued).  Thirdly the air pressure gradient between the high in the east and the incoming low could create gales over the upper North Island, a similar set up to two weeks ago.

WeatherWatch.co.nz says we seem to be in a 7 day cycle at the moment – the weather being stuck in a holding pattern with lows coming in from the north west and large highs continuously coming in south of Australia .

WeatherWatch.co.nz expects rain warnings to be issued later in the week – the first of the rain and wind should move in later on Friday in the Far North. It’s unclear if wind warnings will be needed too.

The government forecaster is also monitoring the situation, predicting a moderate chance of heavy rain leading to rain warnings this Friday and Saturday for Northland, Coromandel and Bay of Plenty and lower risks for the remaining regions in the top half of the North Island from Taranaki to Gisborne and for northwest Nelson, southern Westland and northern Fiordland.