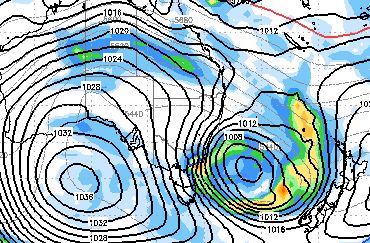 Snow has reached as far north as the New South Wales Central Tablelands, a result of the coldest blast of the year so far.

Snow fell as low as about 1000 metres above sea level overnight yesterday. As much as one or two centimetres of it fell at Sunny Corner, between Lithgow and Bathurst, and there has also been a light scattering in Oberon.

The snowfalls are now turning to sleet and drizzle as the air slowly warms up. It got as cold as minus three degrees in Oberon overnight.

Further south, nearer the intense low pressure system which is causing the current wintry blast, snow has been much heavier. Snow ploughs are being used on the Monaro and Snowy Mountains highways between Cooma, Bombala and Bega due to heavy snow. Brown Mountain, just west of Bega is being blanketed.

The low pressure system is heading towards New Zealand, taking the coldest air with it, so snowfalls will ease off and contract higher up the mountains. Snow should be restricted to the alps tomorrow.

Heavy snowfalls have also occurred in Victoria and Tasmania, as much as 40 centimetres worth at both Mt Baw Baw and Liawenee. Snow fell as low as about 500 metres in Victoria and near sea level in Tasmania.

Any idea of the chance of snow in Queenstown?

Hi there, yes we think there’s a chance for snow on Wednesday.  One to watch!

They can keep it over there,may lift our economy somewhat at least weatherwise stopping them rushing there in droves.