Heavy showers move back in 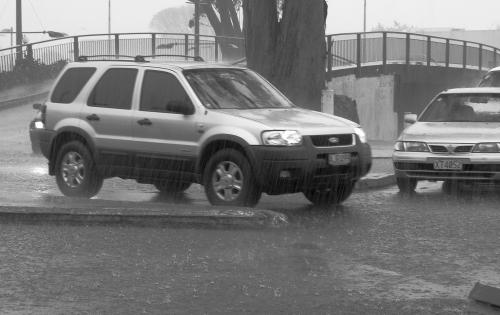 Heavy showers are moving back in to Auckland and other northern and western parts of New Zealand tonight as a deep low remains out in the Tasman Sea.

The low means an unsettled Saturday for many in the North Island but conditions should improve quickly for South Islanders after wet day today in the east.

A big thunderstorm at lunch time hit the Eastern Waikato town of Te Aroha causing the town’s fire alarm to go off while just up the road towards Paeroa the main highway was bone dry.

More downpours, like this one taken yesterday in Auckland, are on the way tonight.  Image / Mandeno Moments.

Tonight the low to the west of the country will drive in more showers becoming so frequent that it will probably become classified as ‘rain’ for many areas.  (Rain is usually described as precipitation that lasts more than 30 minutes and covers a significant area)..

By noon tomorrow the centre of the low is likely to cross over Auckland city bringing heavy showers but conditions should slowly improve with long dry spells developing quickly after lunch.

Light winds will remain over the South Island ahead of the next storm which is likely to move in early next week.

Rain,Rain go away, come back another day!
Auckland Festival tug ride this morning 🙂