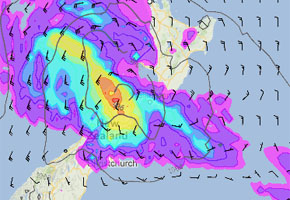 A low pressure system will form over central New Zealand overnight and some fairly reasonable rain is likely to develop about the top half of the South Island.

In particular the ranges of Nelson overnight and tomorrow morning, then the focus shifts to areas north of about Amberley on the east coast of the South Island through to southern Marlborough from tomorrow morning and through into afternoon as the low pressure system mentioned above moves southeast.

WeatherWatch.co.nz’s opinion is that 75 to 110mm of rain may fall about the ranges of Nelson particularly in the northwest and a similar amount for the hills and ranges of North Canterbury north of about Amberley through to southern Marlborough.

Most other areas about the upper South Island and lower North Island will see rain through tonight and tomorrow however it is not expected to be as heavy as the places mentioned above.

Keep up to date with any weather warnings or watches put out by Government forecaster Metservice if planning to be in the regions or areas mentioned above through tonight and tomorrow.