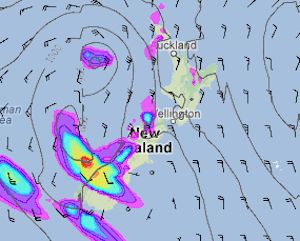 A complex low pressure system will be bring rain to parts of New Zealand tomorrow.

Unfortunately, it may not be the kind of rain most people want.  In some cases it will be very light and won’t make much of a dent in the water deficit.

In other cases, it will be quite heavy.

Government forecaster MetService feels the threat of rain is high enough that warnings are warranted for parts of the South Island.

A complex trough is expected to move slowly over the South Island on Sunday. This trough is preceded by moist northerlies, bringing rain to many areas of the country, especially in the north and west of the South Island. The heaviest falls are likely in the ranges of Westland south of Otira, where 125 to 175mm of rain is possible during Sunday. In addition, the ranges of northwest Nelson may receive 100 to 125mm.

People in these areas are advised that rivers and streams may rise rapidly, surface flooding and slips are possible.

Ranges of Westland south of Otira

In the 24 hours from midnight Saturday to midnight Sunday, expect 125 to 175mm of rain to accumulate. Peak intensities of 20 to 30mm/hr Sunday afternoon and evening in possible thunderstorms. Note, further heavy rain can be expected on Monday.

In the 24 hours from midnight Saturday to midnight Sunday, expect 100 to 125mm of rain to accumulate. Peak intensities of 10 to 15mm/hr Sunday morning and again Sunday evening. Note, further heavy rain can be expected on Monday.

In addition, the top of the South Island will be monitored for the possibility that rainfall rate will reach warning criteria.  A period of heavy rain is expected for the Bryant and Richmond Ranges.

Another area that will need to be watched tomorrow is Northland.  There could be enough energy on the north end of the system tomorrow to set off widespread rain about Northland.  Even a few thunderstorms can’t be ruled out.

WeatherWatch.co.nz Forecaster Howard Joseph says that the rest of the country will see either little or no rain tomorrow.  Joseph says “a few showers are possible about eastern Canterbury tomorrow.  A few showers may also be found about the Waikato, eastern Bay of Plenty and East Cape/North Gisborne.”

Doesnt start until tomorrow evening for parts of the south island as the low which is now just a single low not two will cross the island during this time, and much of Canterbury will still be looking at around 20-30mm of rain.
Theres another hit of showers coming in on Monday night with a more direct cooler SW flow.
Something to note though is that this system is a good thing its knocking the balance of highs in the south tasman out the door as we see next weekend our first strong NW/SW frontal system return.
Just what the country needs.