Home > News > Heavy rain still on track for the west...

Heavy rain still on track for the west 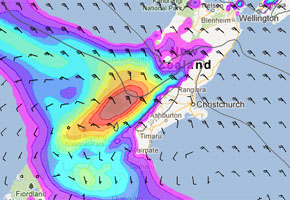 The incoming heavy rain is still on track to hit the West Coast of the South Island from Friday then ease during Sunday, showers will continue at times through to Monday but shouldn’t be as heavy. The totals over this whole period could be quite high with 300 to 400mm falling on the Coast and in the ranges / Southern Alps. The main period of heavy rain is likely on Friday and Saturday however, peak time for the heaviest rain at this stage looks to be the later half of Friday.

It will not be the best weekend for outdoor activities on the West Coast that’s for sure, also rivers east of the divide will rise rapidly with the heavy rain in the alps forecast. Strong west to northwesterly winds are still likely in exposed inland areas on the eastern side of the divide for a time on Friday morning then again on Sunday.

Runanga just north of Greymouth has coped it recently with two flooding’s last month. Greymouth resident Dale Small has reported that the council has done some work to Raleigh Creek so this will be the first test of work carried out to help prevent flooding.

The low pressure system generating all this is still looking likely to slip south of the country early next week with a southwest change then moving over before another anticyclone moves in. The high should bring fine weather again to many areas particularly in the east for the latter half of next week.