Home > News > Heavy rain is back in South Canterbury...

Heavy rain is back in South Canterbury 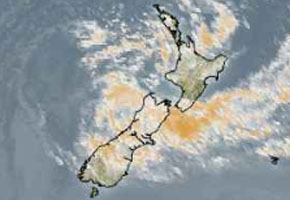 Showers are moving over the North Island from Taranaki across to the Bay of Plenty and further north, some are heavy and there is even the odd rumble of thunder out there. Sunny weather is developing on the east coast however the odd shower may develop south of Hawkes Bay later this afternoon.

Cloudy over most of the South Island with wet weather. Skies are quite cloudy on the West Coast mainly in the form of thick high cloud with the odd shower about in Buller, temperatures don’t appear to be to mild at this point in time there and may remain that way unless a southeasterly surge comes through. Dry in Southland also however skies are looking quite cloudy.

Heavy rain has moved into South Canterbury again a week after there was 2 days of heavy rain in the region, the rain should ease around midnight. If we return to our same old haunts that we reported on last week we can see that Geraldine Bush has received 40mm so far from yesterday and today, Hadlow 55.5mm and the most so far goes to Kakahu Bush at 71.5mm.

River flows are up in the South Canterbury area also but it doesn’t appear to be very bad at this stage compared to a week ago. They will continue to rise through today however so if in the area it would be wise to keep an eye on conditions.