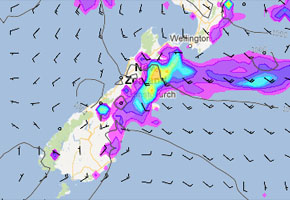 Heavy rain is likely to affect the South Island’s east coast tonight through till tomorrow. More specifically we have heavy rain at the moment in parts of Mid Canterbury, South Canterbury and about the Kaikoura Ranges.

From now through till midday tomorrow a further 30 to 60mm is expected about the foothills of Canterbury, the higher 60mm figure more for the foothills in North Canterbury. A further 80 to 100mm about the Kaikoura Ranges and coast till later tomorrow afternoon then clearing.

Friday will be more settled as a weak ridge lies over us, then on Saturday the next incoming low ramps up the wet weather once again. Heaviest falls are likely to be in the north and east of the North Island late on Saturday and on Sunday, for the rest of the week the heaviest falls will likely be in the east of New Zealand easing on Friday before yet another low pressure system.

This coming Monday and Tuesday are looking good at this stage with another low just west of the country set to bring another period of southeasterly winds to the South Island’s east coast.