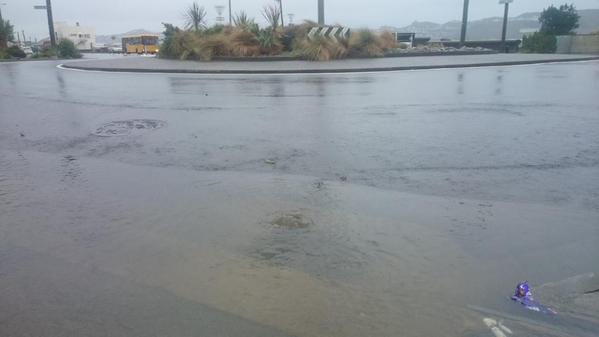 Flooding is causing problems throughout Wellington this morning.

The Fire Service has been called to 30 incidents of flooding in the last two hours with most calls coming from central Wellington, a spokeswoman said.

Heavy rain had caused the flooding, which was causing problems on roads near the Basin Reserve.

Police said officers were at the scene of surface flooding on Roxburgh Street and Marjoribanks Street but no roads had been closed.

A police spokesman said the rain had been easing.

Newstalk ZB reporter Frances Cook was in the Aro Valley this morning where muddy water was up to her ankles.

She says the main street looked like a river with silty water pouring through it.

Her house was flooded to ankle-deep, but said some of her neighbours had water up to their knees in their houses.

Newstalk ZB reported one car had to be rescued near the Basin Reserve, and a truck got into trouble after driving into a manhole which had had its cover blown off.

Pauline Cross, 25, a baker at Arobake on Aro St in Aro Valley, said she arrived at work at 2.30am.

“It wasn’t raining when I got to work and then it started pouring down,” she said.

She said at 5am the rain was so bad, Aro St looked like a “river”.

“It hasn’t got that bad before, it was pretty bad.”

She said when delivery drivers pulled into the car park outside the bakery early this morning a “wave” of water came into the shop.”

Arobake owner Max Fuhrer said it was unusual for water to flood the store in heavy rain.
“The [rain] must have been higher than usual,” he said.

The water has since cleared along Aro St, leaving some debris strewn across the road.

Mr MacLean said the torrential rain in Wellington had caused flooding and problems all over the city.

Low-lying areas such as the Basin Reserve, parts of Newtown, Miramar and Kilbirnie, had been most affected.

“We’ve got our contractors out, they’ll be trying to clear drains and also get manhole cover back on manholes as a matter of priority because that is actually a dangerous thing when they are sitting exposed for motorists and pedestrians.”

There have been a number of reports of manholes that have “popped” due to water pressure and there have been reports of at least two vehicles already being damaged after their wheels had dropped into the open holes, he said.

“If anyone sees a manhole with a lid ajar then they should give the council a call.”

Mr MacLean said the council was also getting several reports of flooding to private property.

The noise from the thunder was incredible, huge crack and boom. It was so loud that I near jumped out of my skin. We often hear thunder as a huge crack, separate from the lightning crack. Storms can come in off Cook Strait very low down or at sea level here, so that is probably why. It can be scary to see the mesocyclones in fronts churning around and around. Sorta glad it was dark when that hit last night.

We had a fantastic Electrical storm in Porirua about 10pm with almost continuous lightening and thunder for over 30 minutes, rain was torrrential.

Lost an hours sleep but if Mummy Nature puts on a show like this I wouldn’t miss it for anything.

We don’t get storms like this often but when they are good they would rival those on the South Island West Coast I’m sure.