Heavy rain and wind on the way 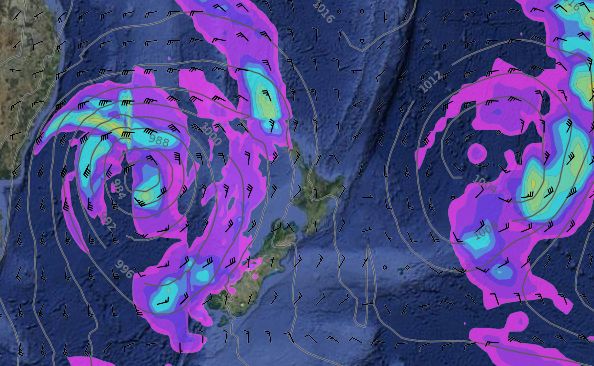 A fast developing and large low pressure system will form across the western Tasman Sea over the next 48 hours and will bring wind and rain to many parts of the country by the end of the weekend predicts WeatherWatch.co.nz.

The weather news authority says by Saturday New Zealand will be sandwiched in between a deep low to the west and sub-tropical low to the east.  While Saturday looks fairly settled and dry for many areas, Sunday and Monday do not.

WeatherWatch.co.nz weather analyst Philip Duncan says the wind and rain will move in to northern and western areas first.  “As we head into this approaching low the winds from the north will be very warm and we may see some eastern areas pushing towards the mid 20s for the first time in a number of months.   But by the end of the weekend and early next week the winds will slowly turn to a colder south westerly and period of wind and rain should affect most places”.

Mr Duncan says driest areas will continue to be in the east.

“With warm, humid, air mixing with cold, drier air we may see a few thunderstorms popping up the western coastline anywhere from Sunday to Tuesday”.

“Our international tourists out for the Rugby World Cup are getting a taste of Spring weather in New Zealand – long warm sunny spells mixed in with wind, rain and a shot of colder air at the end”.

WeatherWatch.co.nz says the heavy rain will likely prompt rain warnings along the West Coast but a question mark remains over whether it will be heavy enough across northern New Zealand for rain warnings.

While strong, even gale force winds are predicted in some exposed areas there were currently no indications of severe gales in the forecast however blustery conditions were expected from the north to the south as the large rolls moves through over a three or four day period.

We will track the low closely and bring you more detailed updates in the coming days detailing who will get the wind and rain or both.

– Homepage image – Twin lows predicted on either side of NZ this Saturday night, courtesy Weathermap.co.nz