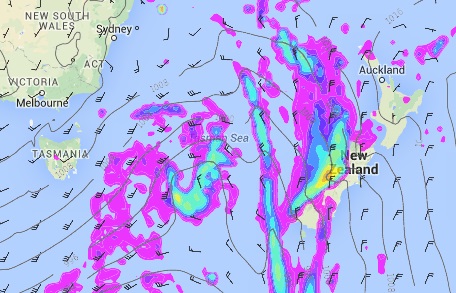 It’s looking like 2014 will go out with a bang – and not in a good sense, with rain and strong winds in many parts of the country.
There’s a veritable “wall of rain” heading towards the country from the Tasman Sea, which means western parts of the South Island in particular are in for the worst of it today, and into tonight.

Rain on the West Coast is likely to be heavy – South Westland will get the worst of it this morning, then North Westland by afternoon.
The rain risk is for most of the Southern Alps, but east of the Canterbury foothills that risk will fall away.

Further north, Nelson will see rain this morning (possibly heavy), and again this evening for a time.
Though it won’t be as heavy as the coast, it will persist and stay steady for a while.

Areas from Canterbury up through to Marlborough will see strong north to northwesterlies, gusting to gale strength about inland areas in the afternoon.
Northwesterlies will gust strongly through Cook Strait, and eventually find their way to Wellington by afternoon – though some strength will be gone from them by then.

Later in the evening and overnight, northerlies will get up a bit on the East Coast of the North Island, though again these will lack the potency of the Cook Strait gales.

Back down on the West Coast, winds are likely to be gusty, maybe strong at times from the northeast, then will swing northwest in the afternoon for South Westland and further north in the evening.
The northwesters won’t be as strong, but they will still be fairly gusty.

Northerlies about Nelson may also be strong at times today – though the city itself will be somewhat sheltered from the worst of it.