Home > News > Heaviest rain in a decade for parts of N...

Heaviest rain in a decade for parts of NSW 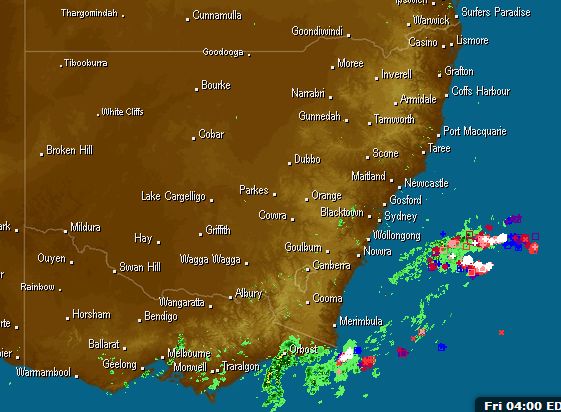 A low pressure trough and front have caused widespread rain across New South Wales overnight, with some areas seeing their heaviest 24 hour rain in over a decade.

Falls were generally heaviest along the ranges and southern parts of the state. Deniliquin in the far southwest received 45.6mm, it’s heaviest 24 hour December rain since at least 1997 and the heaviest 24 hour total for any month since March last year.

Widespread totals of between 20-70mm fell across the NSW/VIC border, while further north between 10-20mm fell along and just west of the ranges. Thredbo Village gained 55.8mm overnight, its heaviest December 24 hour total since 2010. A cool upper level air mass also allowed some of this rain to fall as light snow.

Albury received 29mm, their heaviest falls since September and the heaviest for December in eight years.

Showers are continuing today with 26mm already recorded since 9am at Mount Sandon in the North West Slopes and Plains district. Meanwhile, just west at Tamworth, 13.6mm fell in ten minutes earlier today as thunderstorms swept across the region.

This rain will contract further east and peter out to drizzle along eastern areas later today.

A high pressure system will then move over the state tomorrow, clearing the vast majority of NSW and bringing sunny conditions. However, a cool air mass will keep temperatures in the low to mid-twenties.